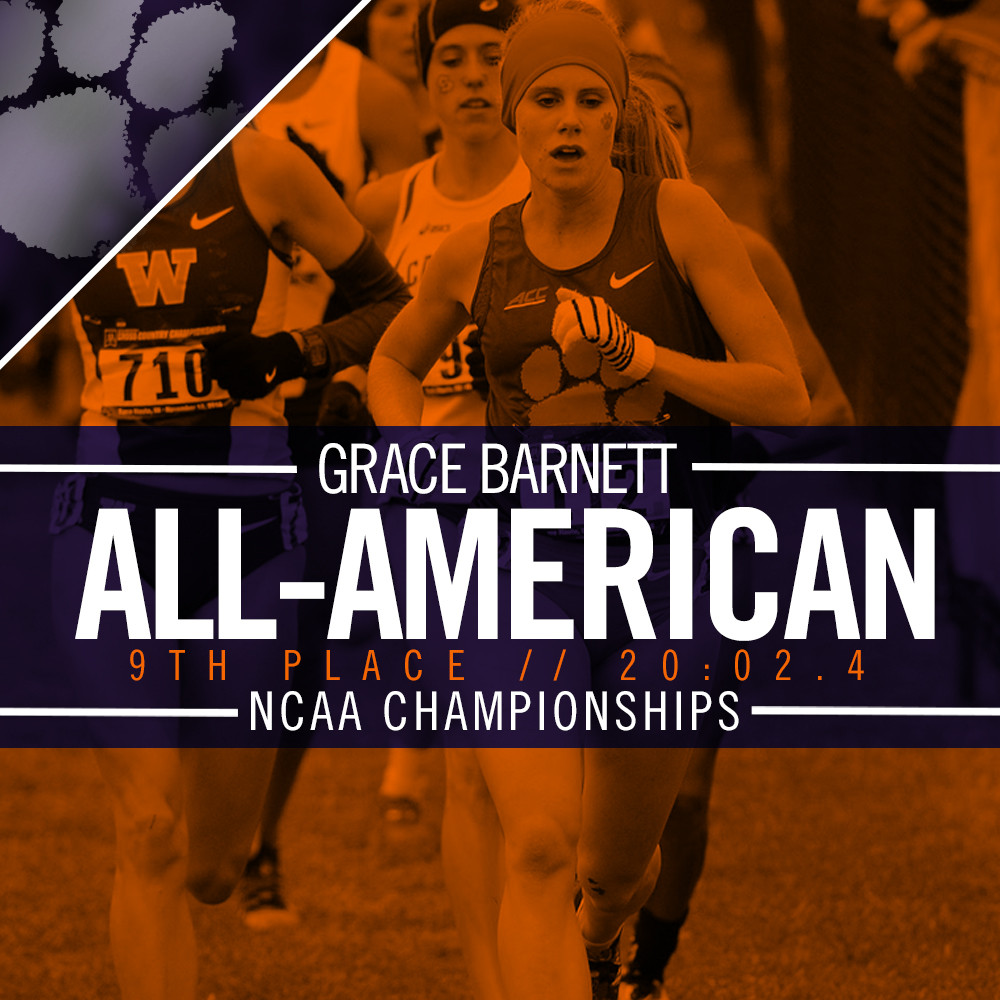 TERRE HAUTE, IND. — Grace Barnett made history Saturday by becoming the 10th female in Clemson history to earn All-America recognition in cross country following a ninth-place finish at the NCAA Championships. The Tiger senior is the first Clemson female since 1990 to be an All-American in cross country.

“It still feels unreal,” Barnett said. “Coach (Michael) Porter prepared me well and I was able to execute the race plan. Everything fell into place at the end. I was 16th or 17th at the 5K mark, but I felt really good at that point.”

Barnett ran the 6,000-meter LaVern Gibson Championship Course with a time of 20:02.4, improving by 37 seconds over her time from the Pre-Nationals event in October on the same course. She averaged 5:22 per mile and was the ACC’s second-best finisher.

“It was a really exciting day for me, with most of my family and some teammates here to support me,” she said. “When I came out to talk after finishing, they were waiting for me. I’ve been overwhelmed by the support. I was really upset running the Pre-Nationals race last month. Today’s focus was not the time, but rather staying sharp and running more representative of how I’ve trained.”

“The goal was to be top 15,” said Porter, Clemson’s cross country coach. “She was in a good position early and had to be patient through 4,000 meters. She ran down several of those girls in front of her in the last couple thousand meters. The temperature was in the mid-40s with a strong wind, so the elements really challenged all of the runners. Grace really has trained well the last five weeks, and it was great to see her put it together to finish out her cross country career.”

Barnett concludes her career as one of the program’s most decorated cross country runners in recent memory. She earned All-ACC honors in 2015 and 2016, was named to the All-Southeast Region Team last week, and capped it off with her first career individual All-America honor.

“Finishing off cross country this way is amazing for Grace,” said head coach Mark Elliott. “As a freshman, she couldn’t finish races. Now she’s one of the top runners in the NCAA. She grew mentally strong over the years. You want athletes to learn and grow the way Grace did. Her result is a testament to how hard she’s worked.”