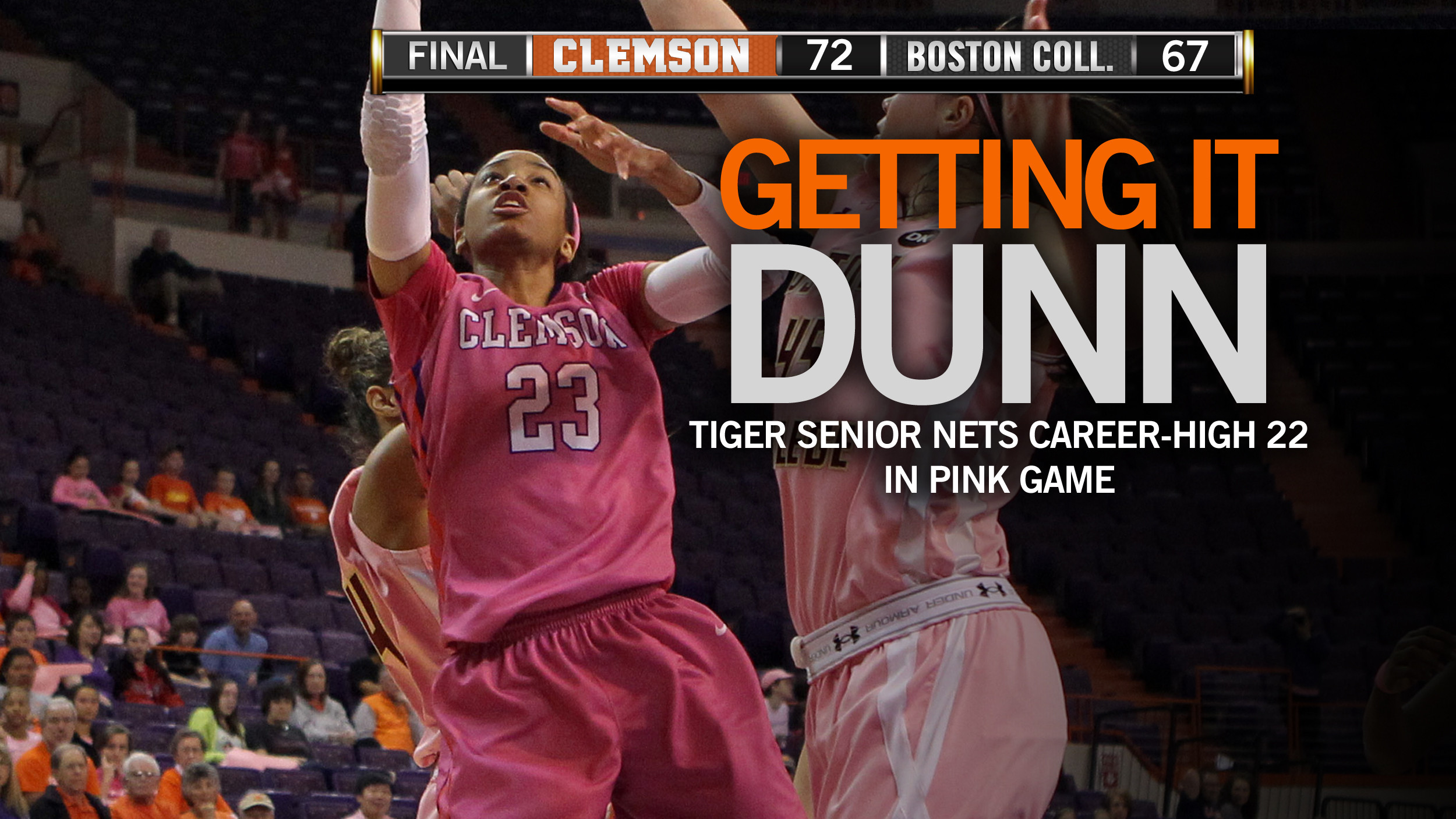 Final Score: Clemson 72, Boston College 67 Records: CU: 12-16, 4-10 ACC; BC: 12-16, 3-11 ACC Clemson Leading Scorer: Chancie Dunn – 22 points  Updated Series Record (trend): 4-7 (W2) Next Game: Clemson v. Florida State, Feb. 23, 2 p.m., Clemson, SC CLEMSON, SC – Senior Chancie Dunn scored a career-high 22 points and a total of four Tigers hit double-figures, propelled the Clemson women’s basketball team to a 72-67 win over Boston College Thursday night in Littlejohn Coliseum in the Play4Kay Pink Game. The win snapped a five-game skid, as the Tigers improved to 12-16, and 4-10 in league play.  It was the Tigers’ second straight victory over the Eagles (12-16, 3-11 ACC), the first this season. Clemson withstood an early bombardment of from BC, who hit 11 of their first 16 attempts, five of which were behind the arc, in building a 26-15 lead nine minutes into the contest.  However, Dunn sparked a 19-5 run gave the Tigers a 41-35 lead going into halftime. The Decatur-native netted 17 points on 8-14 from the field, while Nikki Dixon and Quinyotta Pettaway each added eight points in the frame.  Clemson  established a presence  in the paint early, as they almost doubled up Boston College in points in the paint, 34-18, many of those buckets coming via Quinyotta Pettaway, who had 11 points on 5-10 shooting. The Tigers outscored the Eagles 30-9 in bench points, with Dixon off the bench as the third of four Tigers with double digits tonight, putting up 19. She also led the team with six rebounds and four steals on the night. Kelly Gramlich was the fourth Tiger in double digits, adding 15, including six made free throws in the last 21 seconds of the game to ice the victory. Gramlich has now scored in double figures ten times this season.  The Tigers will play at home again Sunday as they host Florida State, in what will be senior day for Chancie Dunn and Quinyotta Pettaway.  Player of the Game: Chancie Dunn – Dunn’s career-high 22 points, including 17 in the first half, came in her 106th career game, and second-to-last at home. She also added five rebounds and three assists in 33 minutes of action Stat of the Game: +16, +21: Clemson outscored Boston College 34-18 in the paint and 30-9 off the bench in the victory Team Notes

Audra Smith Quotes: Opening Thoughts “As I heard the Boston College staff say in the hallway after the first half, ‘Who is 23?’    For Chancie, it’s her senior year and her second to last home game. She was great tonight.  She did a phenomenal job of stepping up to her scoring area and knocking down some shots.  Nikki did what we told her to do, attack the basket.  Gramlich was phenomenal down the stretch and knocking down those free throws for us.  She did  a great job.  Pettaway came in and gave us some quality minutes as well.   Great team basketball against a team that shoots the three extremely well. We couldn’t play a zone because they shoot the ball too well.  We just got to exert some energy and deny them.  If they drive on us, they drive on us.  I’d rather they drive on us than shoot it.  We have to play the percentages and take away the three-point shot as best we can and we did a good job of that in the second half.” [&amp;lt;a href=”//storify.com/ClemsonTigers/clemson-vs-boston-college” mce_href=”//storify.com/ClemsonTigers/clemson-vs-boston-college” target=”_blank”&amp;gt;View the story “Clemson vs. Boston College” on Storify&amp;lt;/a&amp;gt;]