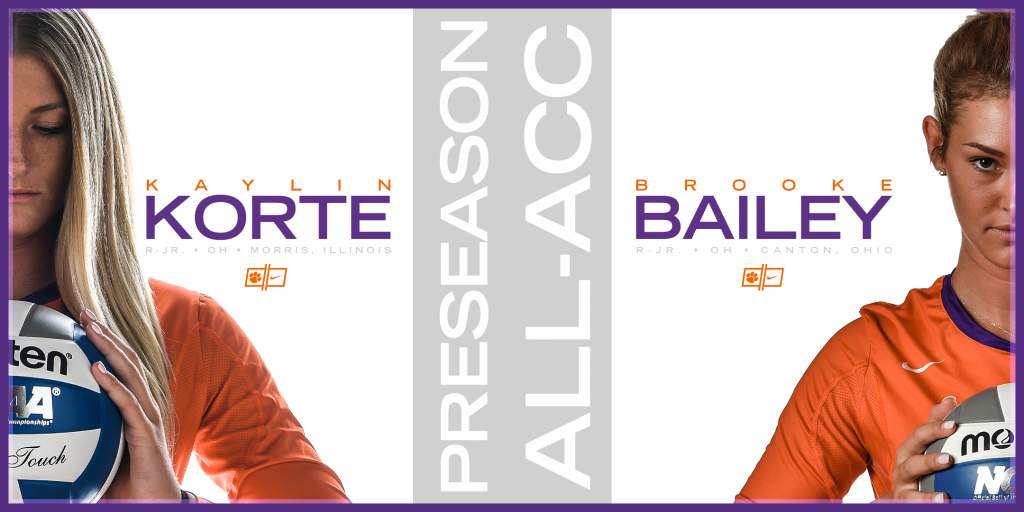 Bailey was the Tigers’ top player in 2018 as she garnered Second Team All-ACC honors last season. The then-redshirt sophomore led Clemson in hitting last season, averaging 3.39 kills per set and also played in all 129 sets. The Canton, Ohio native elevated her game against stiff competition by averaging 3.55 kills per set when facing 2018 American Volleyball Coaches Association (AVCA) top-50 teams. Bailey also ranked fifth in kills (3.71/set) against ACC opponents last year. She also posted double-digit kills in 28 a team best of the Tigers’ 34 matches and finished the last 18 matchups with at least 11 kills. Bailey tied the team’s single-match high last season with 20 kills in Clemson’s four-set win over NC State on Oct. 26. Additionally, Bailey guided the Tigers to their first victory over Miami – a road sweep on Oct. 19 – since 2011, which was also Clemson’s first win at Miami since 2009. Bailey earned all-tournament honors at the Clemson-hosted Big Orange Bash, which the Tigers won, and Tulane’s Sugar Bowl Classic. For her performance on the court and in the class room, Bailey was tabbed a 2018 All-ACC Academic selection.

Korte returns to the Tigers after missing the entirety of the 2018 season due to injury. The redshirt junior earned Second Team All-ACC honors in 2017 and was also named a 2018 Preseason All-ACC selection. In 2017, Korte led Clemson in kills (3.36/set) and points (3.85/set), both of which put her ninth among ACC leaders. The Morris, Illinois native also ranked second on the team in digs per set (2.23) that year. For the 2017 season, Korte totaled 349 kills, 232 digs and 50 blocks, including 11 solo, and a team-best 21 service aces. She also started in all but one of the Tigers’ 32 and tallied five double-doubles, including a season-high 18 kills and 11 digs in a five-set win over Jacksonville in the Tigers’ second match of 2017. Her 16 kills, eight digs, 3.0 blocks and .324 hitting percentage in Clemson’s sweep over Boston College on Oct. 20, proved to be critical in helping the Tigers collect their first ACC win of the season. Korte was also named to the Big Orange Bash and Yale Invitational all-Tournament teams.

Additionally, the ACC also announced the predicted order of finish by the league’s head coaches. Clemson, who finished in ninth last season, was predicted to finish in eighth in 2019. Two-time reigning ACC champion – Pittsburgh – was deemed the favorite to win this year’s conference title with 13 first-place votes.