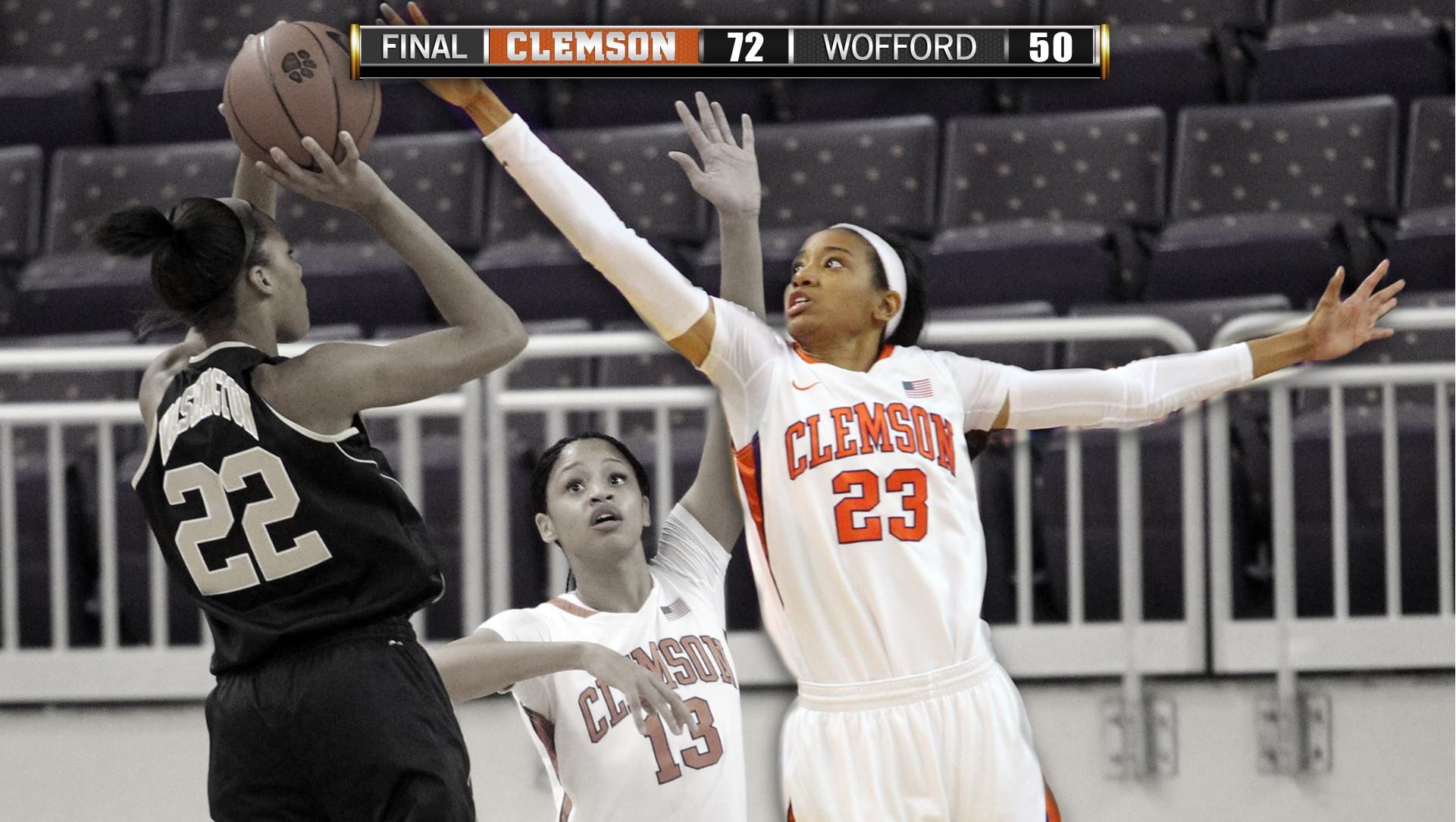 CLEMSON, SC – The Clemson women’s basketball team used stifling defense in a 72-50 win against Wofford in Littlejohn Coliseum on Sunday. Head Coach Audra Smith earned her first win as the Lady Tiger leader, and the team used her hallmark defense to suffocate the Terriers (0-1) in what was one of the best defensive performances in school history.  The Tigers (1-1) held the Terriers to a 13-61 (.213) mark from the field, the tenth-lowest opponent shooting percentage allowed in the 1,154 games in school history. The Tigers scored 23 points off 21 Wofford turnovers, while turning away six shots and outrebounding the Terriers, 43-37. Offensively, Clemson shared the ball much more effectively than in Friday’s loss, registering 19 assists, and outscoring Wofford 14-0 on the fast break.  Senior Chancie Dunn had 15 points in the second-highest scoring output of her career, and went 7-8 from the field to lead Clemson offensively. Nikki Dixon (14 points, 5 rebounds, 5 assists) and Kelly Gramlich (10 points, 3 rebounds, 3 assists) also scored in double-figures for Clemson off the bench.  The Tigers also got nine points and a team-and-career-high eight rebounds from 5-foot-6 Chelsea Lindsay.  Clemson went 10-14 (.786) from the field during a ten-minute stretch in the first half, which saw the Tigers take a 22-11 lead early. A 10-0 run spurred by Jordan Gaillard three-pointer stretch Clemson’s first-half lead to 32-17, and the Tigers took a 36-24 lead into halftime after a desperation three went for Wofford at the end of the first half.  The Terriers had hit just four of 25 attempts (.200) before that 23-footer went at the buzzer.  The Tigers held a lead between 12-and-24 points for the rest of the game, pulling away with an 8-11 (.727) mark from the free throw line in the second half.  Clemson will have a week off before taking on Cal State Northridge next Sunday at 1:00 pm.  Player of the Game: Chancie Dunn – The senior had 15 points, four assists, four rebounds, and two steals, and went 7-8 from the field Stat of the Game: .213 – Clemson held Wofford to .213 shooting (13-61) in the game, the 10th-best defensive mark in school history. Game Notes:

Coach Audra Smith Postgame Quotes: “We shook some things up with the starting lineup and sometimes you have to do that. We’re just trying to find the right combination of kids that will play together. We were a lot more patient offensively today which we had a chance to work on yesterday and also we did a much better job defensively. I’m a man-to-man type coach but I realize with this group of players they are more comfortable with a little bit of zone and I’m really proud with how they responded on such short notice.” “If you look at the scoresheet you’ll see that our scoring and rebounding is spread out and that’s how we’re going to have to play from here on out to be successful. But I’m really pleased with how well we played today and when you get that win under your belt you gain some confidence.” On four new starters…  “My message was that no one person is bigger than the team and we need everybody to be a contributor and I focus on and play the players that show me in practice by their actions, attitudes and how hard they work. It is important to know that nothing is handed to you and just because you start one game doesn’t mean you’ll start the next. It’s every single day that I’m watching their production in practice not only in terms of points and defense, but in terms of attitude also. We’re a team, not just one or two players and I’m glad how the team responded and they came out and played hard.” On Chelsea Lindsay… “Chelsea is a little quiet one but she’s a go-getter. Ever since day one when I got here she’s worked very hard, has been very approachable and does everything she can to make sure she’s doing things right whether it’s by asking questions, watching film or taking extra shots after practice and I’m happy to see that she’s doing so well for us.” [<a href=”//storify.com/ClemsonTigers/clemsonwbb-v-wofford-nov-10-2013″ mce_href=”//storify.com/ClemsonTigers/clemsonwbb-v-wofford-nov-10-2013″ target=”_blank”>View the story “@ClemsonWBB v. Wofford (Nov. 10, 2013)” on Storify</a>]