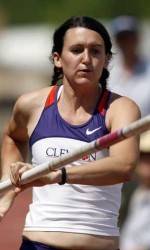 ATLANTA – April Sinkler capped an all-around impressive weekend with a school record 6’1.25″ clearance in the high jump at the Georgia Tech Invitational. Sinkler was the top collegiate finisher in the event and led an impressive string of performances by both Clemson track & field teams on Saturday at the George C. Griffin Track Complex.

Caroline Kennedy became the first female in Clemson history to clear the 13-foot mark in the pole vault on Saturday at the Georgia Tech Invitational. The recent graduate from Orlando, FL finished runner-up in the event with a school record 13’1.5″ clearance on her first try. In fact, she hit her first three heights in consecutive jumps.

The women’s 4x100m relay was runner-up on Saturday with a season-best time of 44.26. Clemson went with its ACC championship lineup once again, a group consisting of Michaylin Golladay, Stormy Kendrick, Kristine Scott and Jasmine Edgerson. The time was the third-best in Clemson women’s track & field history, and it was the best since the 2001 group set the school record.

Scott and Kendrick followed suit with outstanding performances in the 200m dash in the late afternoon. Scott, a senior from Orlando, FL, established a legal-wind personal best with a time of 23.21. She finished fourth in the event, with the same time as former ACC sprint champion Ashlee Kidd (Georgia Tech) who competed unattached. Scott also passed Kendrick on the school’s all-time performance list and moved to the No. 6 position in Clemson’s record books. Kendrick also established a legal-wind best with a time of 23.34, good enough for a sixth-place showing Saturday. Edgerson (23.83) also had a personal best in the event, finishing 12th.

Golladay competed in the 100m hurdles final on Saturday, but ran against a pretty stiff headwind. The red-shirt junior and May graduate in health science posted a time of 13.70 and finished seventh against a field that included several professionals. Brittany Pringley was 11th in the quarter mile, with a time of 55.05.

Sonni Austin had an excellent afternoon in the 400 intermediate hurdles. The freshman from the Atlanta area posted a career-best time of 58.48, which moves her from ninth to fifth on the school’s all-time performance list. She placed 10th out of 36 competitors on Saturday.

Three student-athletes from Clemson placed in the top 10 of the women’s triple jump on Saturday. Patricia Mamona was fourth with a leap of 42’11.5″. Sinkler was ninth with a jump of 41’0.5″, while Nakeisha Wineglass was 10th after a mark of 40’10.25″. Also in the high jump, Linda Buchholz cleared a season-best 5’8.75″ and tied for seventh place.

Brittney Waller advanced to the finals in the discus throw and produced a personal best in the event as well. The J.L. Mann High School product had a top mark of 150’9″, just a few inches ahead of her previous collegiate best in the event. She finished seventh on Saturday.

In late Friday action, Fowler and Moss both placed inside the top 10 in the men’s long jump. Fowler was fourth after a solid mark of 24’4.25″, while Moss was also solid in 10th place with a jump of 23’4″ on his first attempt of the evening. Fowler also finished seventh in the triple jump on Saturday, turning out a top mark of 49’6.25″.

Qualified members of the two teams will return to action May 27-29 for the NCAA East Preliminary Round in Greensboro, NC. Declarations of qualified individuals and relays will be announced at a later date.