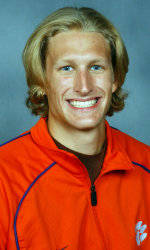 Porter posted his first regional-qualifying time of the season on Friday by winning the 400 meter hurdles at Clemson’s Solid Orange Classic. The Budd Lake, N.J., sophomore’s time of 51.95 is the second-best time in the ACC this season. He also qualified for regionals in the intermediate hurdles as a freshman last season.

His honor marks the second straight for Tiger track & field, as Travis Padgett was named Performer of the Week on April 9. Clemson will compete this week at the ACC Outdoor Championships in College Park, MD.