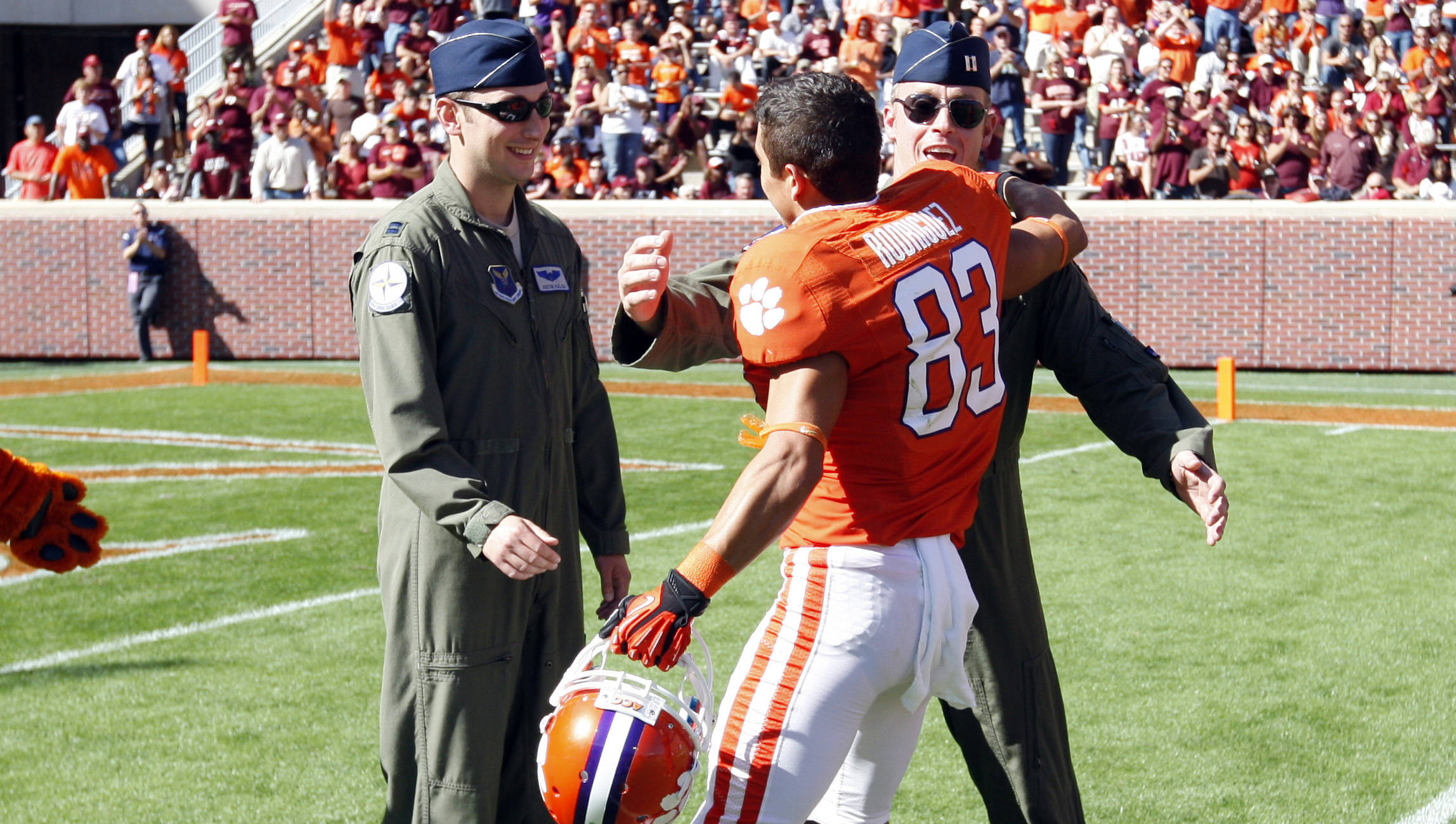 An Inside Look at Clemson’s Military Appreciation Day

I’m not one to blog and this is the first blog of my life, but as the Assistant Athletic Director for Marketing and Game Management for my Alma Mater, Clemson University, I am privileged to have access and be around some really cool behind the scenes happenings. The most amazing one of my professional career occurred this past Saturday, October 20th as Clemson hosted Virginia Tech, a game which is designated as military appreciation day.

This year I took over the reigns of “running” the football games from John Seketa. It’s been an amazing learning experience that I have enjoyed and stressed over. One request that I had was for John to stay on board with running Military Appreciation Day as he does it better than anyone in the country…hands down! And it was truly eye opening to see everything that John does for the Military and I have huge shoes to fill as I take the lead on this great tradition next year.

So I was plugging along working with John getting scripts ready for the Va Tech game when I received an email from Don Munson in the football office. The email he forwarded to me was from the Pentagon and referenced an interesting story as it pertained to Daniel Rodriguez, a current Clemson football player and Purple Heart recipient. I was intrigued and after sharing with some folks in the office, I set up a conference call with the Pentagon…not something that you do every day!

The gentleman I spoke with (Dave) said he came across a really neat story and wanted to pass it along. He said that he located one of the Air Force Pilots who was first on scene to provide support to Daniel’s unit who was taking on heavy fire from the Taliban. And he wanted to know if we would have any interest in the Pilot (Capt. Michal Polidor) coming to the game. I couldn’t say yes fast enough. I told Dave that we would gladly introduce Capt. Polidor during the game, but since there is a football game going on that we wouldn’t be able to have Daniel be part of the introduction, but we would arrange a post-game meeting.

Let me stop there for a second. If you don’t know Daniel Rodriguez’s story…it’s truly an amazing and inspirational story and you need to read it. Google Daniel Rodriguez and pick your choice of hundreds of articles and videos.

Back to the conversation with Dave at the Pentagon. He put me in touch with Captain Polidor who asked if was okay if another pilot from that day, Captain Justin Kulish, came along with him. They arranged for a flight and I sent them a couple tickets in the IPTAY Suite and a parking pass. I added into our script to introduce both of them at the end of the third quarter and made arrangements through Don Munson to set up a post-game meeting with Daniel in Coach Swinney’s office. Both Polidor and Kulish seemed very excited about coming to Clemson and getting to meet Daniel.

Fast forward to game day. Military Appreciation Day had gone just awesome all day long. Seketa had just hit a homerun honoring the military as he always does. When we got to the time to introduce the Pilots, I had a feeling that the crowd would enjoy what was about to happen, but it couldn’t have been better if it had been scripted by Hollywood for a movie. We brought the two Pilots out on the field and the crowd immediately gave them a standing ovation. But like I mentioned before, the one thing would couldn’t do was involve Daniel in the recognition. At least that is what I thought. Completely unscripted, Daniel sprinted from the sideline to the West Endzone and gave both Capt. Polidor and Capt. Kulish a big hug. From Tiger fans to Hokie fans, for that short period of time, football didn’t matter and everyone appreciated what they were seeing and how special that moment really was.

But it didn’t end there. As I mentioned, we had arranged for Daniel and the Pilots to meet after the game. I had the privilege along with Brad and Austin on my staff to escort these guys to Coach Swinney’s office and be in the room as they met Daniel (field hug not included) for the first time. They spoke for 30-45 minutes and while I’ll leave their conversation between them, it was absolutely incredible to hear them share their experiences and I think very few of us can even comprehend what they have done for our country. I sat there and thought about the little things that I stress over and how that doesn’t even remotely compare to what these guys have gone through. As we left the WestZone and said our goodbyes, it was impossible not to reflect on how amazing this meeting was.

These Pilots (heroes) ultimately saved Daniel’s life and they had the opportunity to meet each other. This isn’t something that normally happens and listening to them swap stories is something I will never forget.

These guys were so honored by the reaction they received and couldn’t stop talking about how great of a place that Clemson is and how amazing the people are. They even said they would love to fly a B-2 Bomber over Death Valley for Military Appreciation Day next year. I’m going to figure out a way to make that happen.

I know I still have a lot to learn in this business…but I do know that nobody does Military Appreciation better than Clemson and I was lucky to be a first hand witness to the amazing day that Saturday was. Go Tigers and more important Go USA!