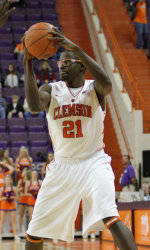 Aloha from Hawaii: Day One

HONOLULU – The Clemson men’s basketball team has had quite a past 24 hours. First, the Tigers defeated Alabama State by a score of 70-45 in a Monday night, 7 PM game at Littlejohn Coliseum. Following a change of clothes and a quick session with the media in attendance, the 57-passenger travel party boarded a Champion bus in Clemson immediately following the game and headed to Atlanta to the Sheraton Gateway Hotel. The team arrived approximately midnight.

The bus was full of not only players and coaches, but families of the coaches and support staff. There wasn’t much time for sleep, as the players received a wake-up call at 5:15 AM for a 5:45 departure to the Hartsfield-Jackson Atlanta International Airport. After grabbing breakfast at the airport, the team’s flight departed at 7:45 AM for Los Angeles. Most players and coaches took advantage of the four-plus hour flight to LAX by catching up on sleep.

One player we caught up with for today’s blog on the flight to LAX was senior Bryan Narcisse of North Augusta, SC. This is a special week for Narcisse, as well as classmate Tanner Smith. The two completed the requirements for their undergraduate Clemson degrees. Obviously, with a Thursday commencement ceremony, the two players will not be able to go on stage and receive their diplomas.

Narcisse graduated in three and a half years in communication studies. When he and Smith suit up for the Tigers on Thursday against UTEP, they will be the first Clemson basketball players to compete with degree in hand since Bruce Martin did so in the 1994-95 season. Narcisse, known to teammates and coaches as “B-Nice,” will take 12 hours of undergraduate courses in the spring semester in order to be eligible to continue competing with the team. He isn’t 100 percent sure what he wants to do after graduation, but he did mention an interest in coaching and teaching.

The plane touched down at LAX at 9 AM local time, and it was quite the shuffle from that point forward. Everyone hopped on shuttles toward the Hawaiian Airlines terminal, and then had to check-in to get a second boarding pass and proceed through a second security check as well.

There was a familiar sight on Clemson’s connecting flight in the form of the Long Beach State basketball team – aka the Tigers’ tournament travel partner. Each of the past two years, the two schools have played one another in exempt tournaments – the 76 Classic in 2009 and the Virgin Islands Paradise Jam in 2010. The 49ers are on the other side of the bracket this week and face Xavier in the opening round Thursday.

When Clemson Head Coach Brad Brownell boarded the plane, 49ers Head Coach Dan Monson smiled at him and simply said, “You guys again?” Brownell was quick to respond with a “Merry Christmas, coach!”

The five and a half hour connecting flight left Los Angeles at 11 AM and put the Tigers in Honolulu at 2:30 PM local time. Clemson had finally reached its team hotel, the Sheraton Waikiki, at 4 PM. After refueling with some food and some time to take in the views of Diamond Head and Waikiki beach, the Tigers took to the University of Hawaii practice gym a little after 6:00. The team was exhausted, but needed to put up some shots and run some plays in order to stretch their legs a little bit. Brownell put his team through a one-hour workout before returning to the hotel for “dinner” at 8:00, or what felt like 1:00 AM to our guys.

Wednesday, the team practices on the floor of the Stan Sheriff Center and ClemsonTigers.com will be on hand to document that and much more. We’ll also take a look at Clemson’s history in the city of Honolulu as well.