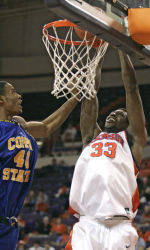 Akingbala to Play at Portsmouth Invitational

Akin Akingbala, a senior on Clemson’s basketball team this past season, has been selected to play in the 54th annual Portsmouth Invitational. The 6-10 center will play for the Holiday Inn Portsmouth team in the eight-team tournament. Akingbala’s first game will be Thursday evening. The tournament will run through Saturday evening.

The Portsmouth Invitational is the only national tournament for 2006 seniors prior to the NBA’s Pre-draft camp in June. The committee invites 64 of the top seniors each year to compete in an eight-team tournament. Each team plays three games. Past Clemson players who have used the camp to help them towards their NBA career include Larry Nance, Greg Buckner and Chris Whitney.

Akingbala is one of seven ACC players who will be competing this year. The others are Robert Hite of Miami (FL), Justin Gray of Wake Forest, David Noel of North Carolina, Travis Garrison of Maryland, Cameron Bennerman of NC State and Sean Dockery of Duke.

This past year Akingbala helped Clemson to a 19-13 record and the second round of the NIT. He started all 32 games and averaged 12.1 points and 8.2 rebounds. He was Clemson’s second leading scorer and top rebounder. In fact, he ranked fourth in the ACC in rebounds and was 10th in blocked shots. He finished the year strong with eight double-doubles in his last 11 games of the year. He averaged 15.4 points and 10.7 rebounds per game over his final 11 games of the year.

Akingbala finished his career with 721 points and 539 rebounds. He shot 58.8 percent from the field, fourth best in Clemson history. He started 49 of the 105 games he played. He was a backup to Sharrod Ford for most of his first three seasons with the Tigers.