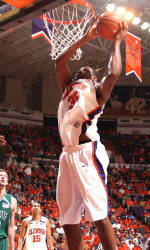 Booker averaged 30.5 points and 8.0 rebounds per game as the Tiger men’s basketball team fell to Charlotte but responded with a double-overtime win over Florida State last week. He set a new career high with 32 points against the 49ers and followed that performance with the second-best scoring game of his career with 29 against the Seminoles.

For the week, Booker shot 77 percent (20 for 26) from the floor and made four of five three-point shots after not making a three-pointer in the first 50 games of his career. His final three-pointer against Florida State sent the game into overtime. Booker also made 17-24 free throws (71 percent) and added seven blocked shots in the two games combined. He played a career-high 42 minutes in the victory over the Seminoles.