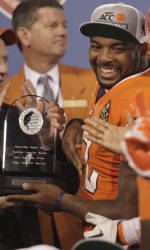 Boyd was named the MVP of the 2011 ACC Championship game after leading the Tigers to a 38-10 victory over Virginia Tech. Boyd finished the game with 240 passing yards and three touchdown passes. He had a fourth rushing touchdown, giving him 31 touchdown passes and five rushing touchdowns for the season, for a total of 36 in terms of touchdown responsibility. Those are season records.