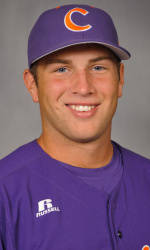 Kieboom went 5-for-9 (.556) with eight RBIs in three games this past weekend. He had at least two RBIs in each of the three games against Eastern Michigan. He added two walks and a hit-by-pitch, good for a .571 on-base percentage, and did not strike out at the plate. He also did not allow a stolen base in his two games behind the plate. In his best game, he had a career-high four RBIs in Clemson’s 14-3 win over Eastern Michigan on Friday.