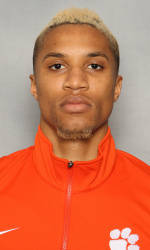 Adams placed fifth in a fast, competitive men’s 60 hurdles final on Saturday at the NCAA Indoor Track & Field Championships in Nampa, ID. The red-shirt junior from Charlotte, NC had a time of 7.60, a personal best, from lane eight to match Duane Ross’ school record established in 1995. Adams came on strong at the finish and was just six one-hundredths of a second off the winning time posted by Syracuse sprinter Jarret Eaton. Adams’ fifth-place finish was the best by a Clemson male since Todd Matthews was fourth in 2002.