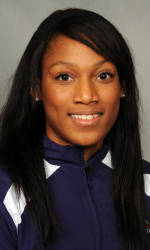 Mamona was national runner-up in the triple jump after setting a school record, breaking the mark of 45’1.75″ set by former NCAA Champion Gisele Oliveira in 2005. Mamona was third heading into the finals, but a monumental leap of 45’5.25″ elevated her past Florida’s Shara Proctor and into the runner-up position. It marks the first All-America performance in Mamona’s brilliant career.