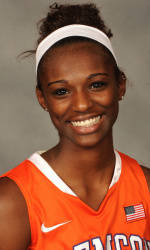 Nikki Dixon averaged 14.5 points, 5.0 rebounds, 4.0 steals, and 2.0 assists in 35.0 minutes per game against two nationally ranked opponents last week. She was named the ACC’s Rookie of the Week for the performance, which was her second league honor of the season, with the first coming the week of November 7-13.

The freshman is averaging 12.2 points per game this season, second among all league freshmen, and her 2.7 steals rank third in the conference overall. Dixon had 18 points and a career-high tying eight rebounds against No. 24 Georgia Tech, hitting 3-6 from behind the arc, and also added 11 points against No. 5 Duke. She also tallied four steals in each contest.