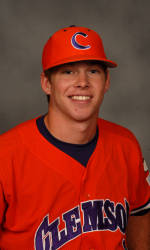 In Clemson’s two one-run wins over Elon at Doug Kingsmore Stadium, Freeman went 4-for-6 with three runs scored and three walks. In the three-game series at Maryland, he was 5-for-11 (.455) and tallied a game-high three hits in the Tigers’ 2-1 victory over the Terps on Friday night.