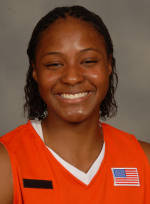 Hardy led the Lady Tiger basketball team to two impressive wins at home last week, a 78-75 overtime victory over Northwestern and a 60-57 comeback win over Ohio University. Against Northwestern, Hardy scored 21 points, including a three-pointer as time expired in regulation to send the game to overtime. She also posted 14 rebounds and eight assists in the game.

Hardy spurred Clemson’s comeback over Ohio, recording 15 of her 18 points in the last 6:35 of the game. She also tallied 10 rebounds in the contest.