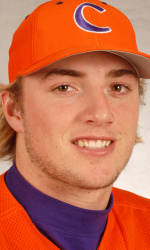 Parker helped the Tiger baseball team to a 5-0 record last week, going 6-for-16 (.375) in Clemson’s wins over Western Carolina, Presbyterian and Virginia Tech. The freshman scored six runs, collected two doubles, three homeruns and 12 RBIs, walked six times and struck out only once on the week.

Parker hit two homeruns in Saturday’s 8-7 victory over the Hokies, including a three-run homer in the eighth inning to break a 5-5 tie. In his 3-for-4 performance in the game, Parker also recorded a double and five RBIs for the Tigers.