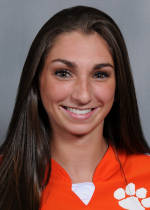 In the Tiger volleyball team’s defeat of Florida A&M on Sunday, Murphy became the first player in program history to record a triple double in assists, blocks and defensive saves, while just the eighth to notch double figures in any trio of categories. The junior tallied a season-high 55 set assists in leading the Tiger offense to 63 kills and a .333 hitting percentage in the four-set match. The native of New Lenox, IL then aided the defensive effort with 11 digs and 11 block assists.