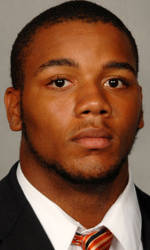 Harper had his second consecutive game with at least 140 yards rushing in the Tigers’ 30-10 win over Wake Forest on Saturday. He had 24 carries for 142 yards against the Demon Deacons, and 27 carries for 143 yards against Florida State the previous week. He is the first Clemson back to gain at least 140 yards rushing in consecutive games since James Davis did so against South Carolina and Colorado (in the Champs Sports Bowl) in 2005. Harper also had three catches for 39 yards against Wake Forest and now has at least 180 yards from scrimmage in each of the last two games, as he had 197 yards against the Seminoles.