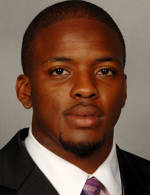 McDaniel had three tackles, a quarterback pressure and a crucial interception in Clemson’s win over N.C. State Saturday. His interception was clutch as it came in the end zone when N.C. State had a first and goal from the Tigers’ seven. The pick kept State off the board on that possession in the game that Clemson eventually won, 14-13. It was the 15th interception of McDaniel’s career, which ties for second best in school history (17). He earned Defensive Back of the Week honors from the Atlantic Coast Conference for the performance.