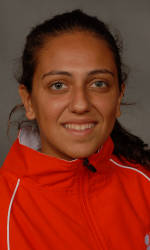 Salge extended her singles winning streak to 10 matches in helping the Tigers to a 6-1 win over Maryland on Saturday and a 5-2 victory over Boston College on Sunday to close out the ACC regular season. Salge and teammate Laurianne Henry were undefeated in doubles play on the weekend as well.

On Saturday, Salge and Henry defeated Maryland’s tandem of Huschke and Krutiyenko 8-3 at flight three doubles. Salge then took a 6-1, 6-0 decision over the Terps’ Karin Lundmark at number two singles.

Against Boston College on Sunday, Salge and Henry were victorious over Krasnopolsky and Nafarrete by a score of 8-4 at the number three doubles position. Playing at flight one singles in the final regular season match of her career, Salge defeated the Eagles’ Lana Krasnopolsky 6-0, 6-2.