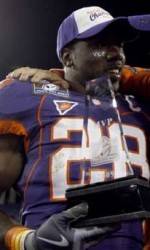 Spiller was named the MVP of the Gaylord Hotels Music City Bowl following his performance in Clemson’s 21-13 victory over Kentucky on Sunday, December 27. During the game, Spiller became the first player in ACC history with at least 1000 yards rushing and 500 receiving in the same season in tonight’s game. He finished the game with 172 all-purpose yards, giving him an ACC record 2,670 for the season and 7,588 for his career. He finished his career in second place in FBS history in all-purpose yards.

Spiller’s eight-yard touchdown run in the fourth quarter gave him a touchdown in every game this year and made him the only player in the nation to score a touchdown in every one of his team’s games this year. He also established a Clemson record for consecutive games with a touchdown with a streak of 14 in a row. He and Travis Zachery (2000-01) had the previous mark with 13 entering Sunday’s game. Also on the fourth-quarter touchdown, Spiller tied the ACC record for touchdowns scored in a season with 21.