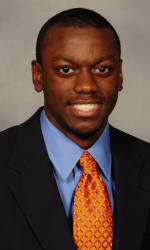 Young scored a career-high 29 points in the Tigers’ 64-62 win over Georgia Tech on Saturday, January 21. Young was seven-for-nine from three point range, nine-for-12 overall and four-for-five from the free throw line in the game. The seven made three point baskets were also a career high.

Following a 23-minute delay in the first half of the game caused by a power surge that turned off the lights in Littlejohn Coliseum, Young scored the Tigers’ next 15 points to give the team a 28-15 lead over the Yellow Jackets. It was the most consecutive points scored by a Clemson player since December 13, 2003, when Chey Christie scored 15 in a row against Georgia in Philips Arena.