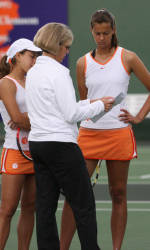 GREENSBORO, NC – The Clemson women’s tennis team received the fourth seed and a first-round bye for the upcoming 2008 Atlantic Coast Conference Women’s Tennis Championship. The tournament will get underway on Thursday at Sanlando Park in Altamonte Springs, FL with the Tigers beginning play on Friday morning.

The Georgia Tech Yellow Jackets, who have shared the league’s regular-season title in each of the last three years, made it four in a row with this year’s being their first outright prize.

Georgia Tech, the league’s top seed, will be looking to collect its fourth consecutive championship crown. The Yellow Jackets, who posted a 10-1 mark in conference action this season with its lone loss coming at Duke in mid-March, will play either No. 8 seed NC State (12-9, 5-6 ACC) or No. 9 seed Wake Forest (8-12, 4-7 ACC) on Friday, April 18.

Receiving a first-round pass for the third straight year include Duke, Miami and Clemson. The Blue Devils won their last five matches to secure the No. 2 seed, posting a 9-2 record in league play. Duke will play the winner from the first round between No. 7 seed Virginia (9-12, 5-6 ACC) and 10th-seeded Virginia Tech (14-12, 2-9 ACC) on Friday at noon.

Winners of their last seven regular-season matches, Miami and Clemson finished the ACC race tied in points with eight apiece. The Hurricanes, who have come in second to Georgia Tech in the last three years for the league title, earned the No. 3 seed after claiming the tiebreaker over Clemson based on head-to-head competition. Miami defeated the Tigers, 5-2, on March 7.

Seven could be the lucky number for Clemson in 2008, as the Tigers have captured the conference crown six times since 1983. The Tigers (12-9, 8-3 ACC), seeded fourth in this year’s tournament, takes on the winner between the No. 5 seed North Carolina and 12th-seeded Maryland match on Friday at 9 a.m.

The other first-round match on Thursday features 11th-seeded Boston College battling No. 6 seed Florida State at 3 p.m. The winner will move on to the quarterfinals, facing Miami on Friday at 3 p.m.

Coverage of the ACC Women’s Tennis Championship will be made available On-Demand every night at 8 p.m. on ACCSelect.com from April 17-20.