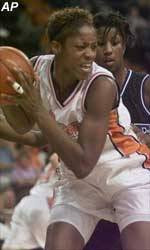 Duke freshman Alana Beard currently leads the league in steals, averaging 3.6 per contest. She also ranks sixth in blocks per game with 1.04 per game. In her rookie campaign, she has tallied 87 steals, which sets a single season Duke record.

Clemson senior Erin Batth currently ranks fourth in the ACC, averaging 8.7 boards per game. She also ranks 10th in the league averaging 0.88 blocks per game and has tallied 227 rebounds this season, including 139 defensive boards.

Wolfpack sophomore guard Ivy Gardner leads NC State with 13 blocked shots this season. She has recorded 28 steals on the season and is second on her club among perimeter players with 3.7 rebounds per contest. This season, Gardner has tallied 58 defensive boards. Duke’s Rochelle Parent has taken 39 charges this season, which is just over one per game. The senior forward ranks 16th in the league, averaging 5.7 rebounds per game. Of all the Blue Devil players to record 500 rebounds, Parent is the only one to have more rebounds than points scored.

Florida State forward Brooke Wyckoff heads into the ACC Tournament averaging 6.7 boards per game and 1.00 blocks per contest. Her 205 career blocks place her sixth in ACC career charts for total blocks. In her senior campaign, she has recorded 181 rebounds, including 133 on the defensive end.

The 2001 ACC Women’s Basketball Tournament begins this weekend at the Greensboro Coliseum in Greensboro, N.C., starting on March 2 and ending on March 5.