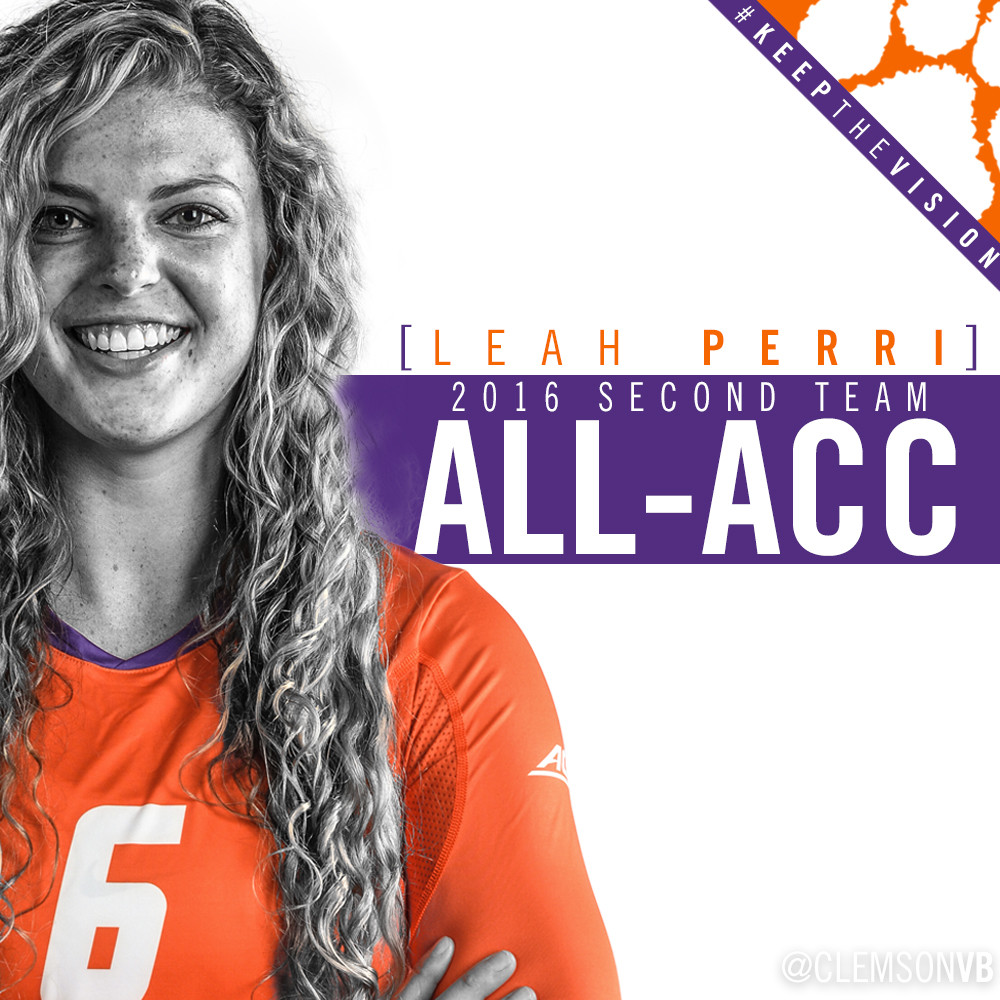 GREENSBORO, N.C. – To conclude her collegiate career, Leah Perri is heralded as one of the Atlantic Coast Conference’s most lethal student-athletes as she earns her sixth All-ACC honor. The second team all-conference honoree adds to her already impressive list of accolades as she was the named to the 2016 Preseason All-ACC team, the 2013 ACC All-Freshman team as well as the Academic All-ACC team each of the last three seasons.

“I’m very proud of what Leah has accomplished not only this season, but really in our two years here at Clemson,” said head coach Hugh Hernesman. “While she has been the focal part of our offense, she developed into our most dependable passer as well after not having a six-rotation role the first two years of her career. You’re not able to do that unless you put the work in. Her focus on the training in practice when repetitions can become monotonous and her desire to put in extra work outside of practice made all the difference in the world for her development into a pretty complete player.”

“Additionally, the load that she carried throughout the season was a large and significant one. To be able to still produce while all the attention of the opposing team is on you is very impressive and she deserved a large amount of credit for.”

Perri finishes her time at Clemson as one of the best to ever put on the Tiger uniform. With 1,483 kills on 4,359 attempts in her collegiate career, she is 10th on Clemson’s all-time list of career kill leaders with the fourth most attempts recorded in program history. The total is just 10 shy of the ninth most kills in Clemson history as Sandra Adeleye earned 1,493 from 2009-12. After recording career-best totals in kills (412), kills per set (3.68), digs (213) and aces (17) as a junior, Perri set career bests in kills (418), digs (273) and aces (23) while committing 30 fewer attack errors as a senior.

The two remarkable campaigns give her 400-plus kills and 200-plus digs in each of the last two seasons and 300 kills or more in all four of her years competing as a student-athlete. She’s one-of-six ACC student-athletes in 2016 to earn 400 kills and 200 digs in 2016 and is just one-of-three ACC student-athletes to hit the mark each of the last two seasons. She became one of the ACC’s best six-rotation players as a junior despite never playing in the back row as a freshman or sophomore.

Over the course of four seasons Perri did not miss a single match, killing 10 balls or more in 81-of-127 matches with 474 sets played to her credit, giving her a career 3.13 kills per set average. She has 20 kills or more in 13 matches, 10 of which came in the last two seasons along with her 15 double-doubles.

Of the 127 matches she competed in, two stand out, both of which came in the last two seasons. In 2015, Perri put the Tigers on her back to defeat Georgia Tech in Atlanta for the first time since 2011 with 20 kills, two aces, two solo blocks and 19 digs to her credit. In the midst of Clemson’s 3-1 victory over the Yellow Jackets, it was that match in which Perri earned her 1,000th career kill. For Perri’s best offensive performance, fast-forward to 2016 when she torched South Carolina for a career-best 26 kills on 52 swings with just three errors, giving her a .442 hitting percentage in four sets against the Gamecocks. The total is tied for the most kills in a four-set match by an ACC student-athlete.