On Thursday afternoon, the Clemson Track & Field program will start its quest towards an ACC title, as the program will begin competition against their ACC competitors in the quest for conference glory. Before the competition gets underway, we’ll preview the three-day competition, starting with the field events.

The first event the Tigers will compete in during the championship’s slate of field events will be the women’s weight throw, an event that will feature Danielle Little entering the throwing circle. Little has been the lone woman to compete in the event for the Tigers this season, with Little consistently improving throughout the season and gaining momentum in the competitive setting as the regular season has come to an end. Little logged season’s best marks in the event in five of her six outings. 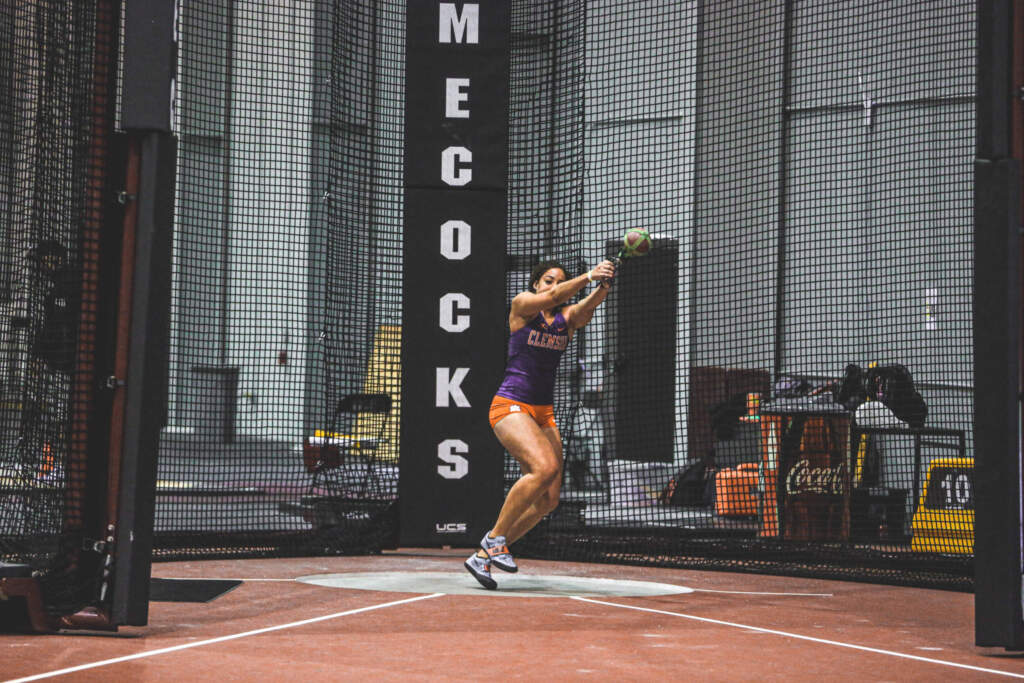 On Friday, the major slate of competition will begin, with both high jumps and long jumps set to compete. In the high jump, Kenya Livingston and Anthony Hamilton will partake in the women’s and men’s competitions, respectively. Livingston has jumped a season’s best mark of 1.76 meters (5-9.25) and currently ranks third on the event’s all-time list with her personal best of 1.79 meters.

On the men’s side, Hamilton will look to improve upon his fourth-place finish from last year’s edition of the championships. Hamilton has competed with ambition throughout the season, earning multiple personal bests and winning three of the six competitions he partook in. Hamilton joined the seven-foot club on Jan. 18 at the Clemson Invitational, clearing 2.14 meters. Hamilton now enters the championship season with a personal best of 2.15 meters (7-0.5), good enough to move Hamilton into sole position of the tenth-best mark in program history.

D.J. Ledell and Caroline Johnston will be the sole competitors in the men’s and women’s long jump on Friday. Both athletes will pull double duty at the conference championships, as they will come back to the runway on Saturday to compete in their respective men’s and women’s triple jump competitions. Looking at the long jump performances of the two athletes, Johnston has been consistently excellent, earning multiple personal bests and competing with a mature poise that speaks to the work and development overseen by assistant coach Chris Bostwick. Johnston will enter the competition with a personal-best mark in the competition of 6.02 meters (19-9).

On the men’s side, Ledell enters the conference championship with three performances in each event throughout the year. Ledell carries season-best marks of 7.24 meters (23-9) and 15.28 meters (50-1.75) for the long jump and triple jump, respectively. Ledell’s long jump mark this season doubles as an indoor personal best as well.

Friday field event action will be closed out by Taylor Boyles in the men’s pole vault. Boyles has developed into a steady performer for the Tigers, routinely setting personal bests in the event, ultimately culminating in Boyles jumping 4.70 meters (15-5) at the Tigers’ regular-season finale, the USC Indoor Open. Boyles has gained a load of valuable experience during his freshman campaign, either equaling his personal best or setting a new best, in every competition he has taken part in. 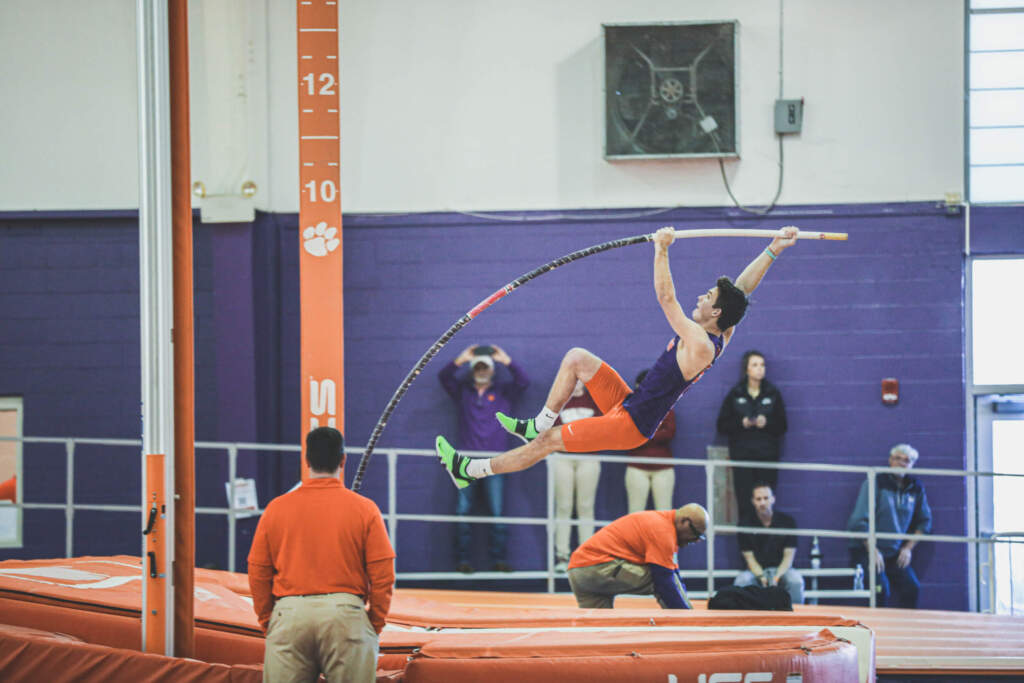 The men’s shot put competition will begin the field event slate of action on Saturday. The group will look to score valuable points in the men’s effort for team glory, with the group led by Grant Voeks, who has been superb throughout the year. Voeks, a redshirt senior for the Tigers, has logged the second-best performance in program history on three separate occasions this year. Voeks, who has been an excellent competitor this season by logging three top-five finishes, will look to close out his indoor career with a sizable personal best and podium finish.

Later in the day, the women will compete in the shot put and the fireworks may go off once the Tigers start competing. The group, currently holding the tenth position in the USTFCCCA #EventSquad rankings, will look to contribute big points to the Tigers’ efforts. Veronica Fraley is the group’s top competitor and has been excellent against ACC competitors this season. Fraley enters the competition in the second position in ACC rankings. After the Tigers’ efforts in the regular season, the group now touts three of the seven best athletes to ever compete in the event at Clemson. While Fraley has been the epitome of consistent, Little will be competing in the event for just the second time this season. Little made her debut at the Tiger Paw Invitational.

In the women’s pole vault, a pair of Tigers will look to continue a hot streak of competition against the ACC’s best competitors. Alex Svacha and Jessica Brewer both set personal-best marks in the event at the USC Indoor Open, with each athlete joining the 12-foot club with their clearances of 3.67 (12-0.5) on their final attempts at the bar. 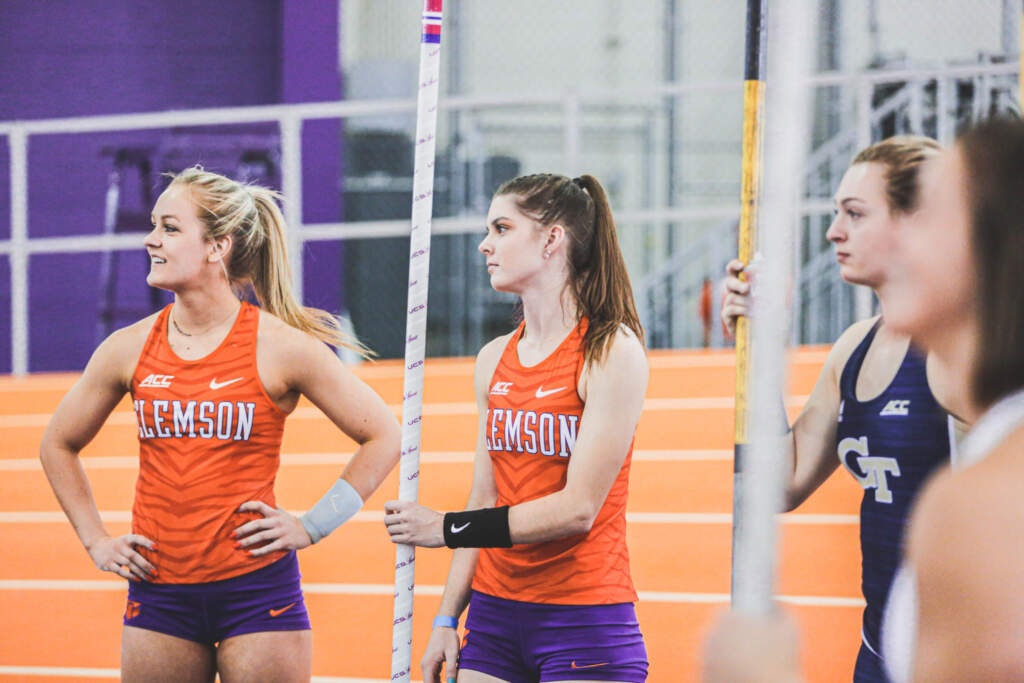 The final field event of the competition will be the men’s and women’s triple jump competitions. Ledell will take to the runway for the Tigers, just like he has three other times this season for Clemson. Ledell will look to improve upon his current ranking of 13th in the ACC.

Johnston and Livingston will be joined by Harleigh White in the women’s edition of the competition, with the three athletes looking to improve on a string of significant performances that it has put together throughout the closing slate of meets.