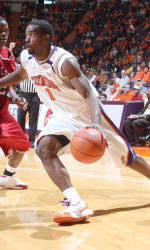 ACC Basketball Players of the Week

Rivers tallied a game-high 28 points as the 25th-ranked Tigers opened their conference schedule with a 91-72 win on the road at Miami Sunday, marking Clemson’s sixth-largest margin of victory ever in an ACC road game. The Charlotte, N.C. senior made 10-of-15 from the floor, including four-of-eight from three-point range in the win. On the week, Rivers averaged 17.0 points and 6.0 rebounds in victories over the Hurricanes and North Florida.

In earning the Rookie award for the third time this season, Landesberg averaged 21.0 points and 7.5 rebounds in games against Longwood and Auburn. The Flushing, N.Y., product shot 61.1 percent (11-18) from the field, making both of his three-point field goal attempts, and made 18-of-22 from the free throw line (.818). In the Cavaliers’ 90-61 victory over Longwood Wednesday (D17) Landesberg scored a game-high 20 points and had nine rebounds. In the Cavaliers’ 58-56 loss to Auburn Saturday (D20) he tallied a game-high 22 points and pulled down six rebounds.