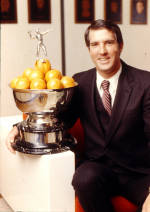 The Legends will be honored at this year’s Dr Pepper ACC Football Championship Game weekend. They will appear at the ACC Coaches and Awards Luncheon at noon on Friday, Dec. 4, and will be honored at the “ACC Night of Legends” held at the Grand Hyatt Tampa Bay on Friday evening. They will also be recognized during pre-game ceremonies at Raymond James Stadium for the 5th Annual Dr Pepper ACC Football Championship, which has an 8 p.m. kickoff on Dec. 5 and will be nationally televised by ESPN.

The group of 12 former gridiron standouts from current ACC schools includes three former ACC Players of the Year, seven former All-Americas, nine players who combined for 79 years of professional football experience and 10 who were drafted into the National Football League including two first-round picks and the No. 1 choice in the 1987 draft (Testaverde).

In all, the collection of players and coaches combined to capture two national championships, one NFL World Championship and 15 ACC team titles.

Weinke, who now resides in Austin, Texas, compiled a 32-3 record as the first three-year starter at quarterback for Bobby Bowden, leading the Seminoles to three ACC Football Championships and the 1999 National Championship as FSU downed Virginia Tech in the Bowl Championship Series (BCS) national title contest. Named the 2000 Heisman Trophy winner as the nation’s best college football player, he led the Seminoles to an unprecedented three straight berths in the BCS Championship Game. By the conclusion of his collegiate career in 2000, he had virtually re-written the Florida State record book and still holds no fewer than 26 school marks in passing and total offense, as well as five Atlantic Coast Conference records. In 2003, Weinke was named to the ACC’s 50th Anniversary Football Team.

Testaverde, who now lives just outside Tampa in Odessa, Fla., became Miami’s first Heisman Trophy winner, claiming the 1986 Trophy. In two seasons as the starting quarterback for the Hurricanes, Testaverde led Miami to a 21-1 record including a 28-16 upset triumph over then-No. 1-ranked Oklahoma in 1986 in the Orange Bowl. That year he was named a consensus All-America and also earned the Maxwell and Walter Camp Player of the Year Awards and the Davey O’Brien Award. The first selection in the 1987 NFL Draft, Testaverde went on to a 21-year career in the National Football League with Tampa Bay, Cleveland, Baltimore, the New York Jets, Dallas, New England and Carolina, throwing for 46,233 yards and 275 touchdown passes.

Ford, who now lives just outside of Clemson in Pendleton, SC, began his head coaching career as the youngest head coach (30 years old) in Division I football with a win over Ohio State in the 1978 Gator Bowl. Three years later, he led the Tigers to the 1981 national championship and was named National Coach of the Year. In all, Ford compiled five ACC Football Championships in his 11 seasons as head coach of Clemson. His winning percentage of .760 is the third highest in ACC history and he ranks second only to FSU’s Bobby Bowden in most bowl victories while an ACC coach with six. His 96 victories, while Clemson’s head coach, are fourth-best in ACC history. At one stretch his Clemson teams were ranked among the Associated Press’ rankings for 41 consecutive weeks and his Tiger teams earned 18 wins over nationally-ranked opponents.

Joining them are a trio of some of the best running backs in the ACC’s formative years in Billy Barnes (Landis, N.C.), the 1956 ACC Player of the Year from Wake Forest, Jim Bakhtiar (Charlestown, W. Va.) of Virginia, who earned first-team All-America honors in 1957, and Duke’s Bob Pascal (Easton, Md.) of Duke who led the ACC in total offense in 1955 and helped lead the Blue Devils to at least a share of the first three ACC Football Championships.

Three more Legends who earned All-America honors include Boston College standout defensive back Mike Mayock (Newtown Square, Pa.), who was a two-sport standout for the Eagles in football and baseball, Virginia Tech triple threat quarterback Bob Schweickert (Grayslake, Ill.), who was named to the then-prestigious Look Magazine All-America team in 1964, and Maryland center Kevin Glover (Columbia, Md.), a 1984 first-All-America and one of the centerpieces to the Terrapins ACC Championship teams in 1983 and 1984.

Completing this year’s impressive Legends class are three more record-setting running backs of the 1970’s and early 80’s in Georgia Tech’s Eddie Lee Ivery (Thomson, Ga.), who set the NCAA single-game rushing standard with 356 yards against Air Force in 1978, NC State’s Willie Burden (Statesboro, Ga.), the 1973 ACC Player of the Year, and North Carolina’s Kelvin Bryant (Tarboro, N. C.), who rushed for over 1,000 yards in three consecutive seasons for the Tar Heels despite playing in only seven games due to injury in 1982.

Barnes, who currently resides in his hometown of Landis, N.C., was named the ACC’s 1956 Player of the Year as he became the first player in conference history to rush for more than 1,000 yards (1,010) in a single season. A first-team All-America selection by the FWAA in 1956, he was also first-team All-ACC in 1955 and 1956. Barnes, a second-round draft choice of the Philadelphia Eagles, went on to a nine-year career in the National Football League during which he rushed for 3,421 career yards. In 1960, he helped lead the Eagles to the 1960 World Championship including a win over the legendary Vince Lombardi’s Green Bay Packers in the 1960 title game.

Bakhtiar, originally from Abadan, Iran, but who now lives in Charlestown, W.Va., earned first team All-America honors in 1957 for the Cavaliers leading the ACC and finishing 6th nationally in rushing with 822 yards. A three-time All-ACC selection, Bakhtiar earned second-team honors in 1955 and first-team accolades in 1956 and 1957. He completed his career as the ACC’s career rushing leader, totaling 2,434 yards in his three varsity seasons. He is the only ACC player to rank in the Top 10 nationally in rushing for three seasons.

Pascal, who now lives in Easton, Md., finished 8th nationally in rushing as a senior in 1955. He helped lead Duke to either an outright claim or a share of the first three ACC Football Championships in 1953, 1954 and 1955 and an overall record of 22-6-3. He tied for the ACC lead in scoring as a junior in 1954, then led the conference in total offense and was second in the league in rushing in 1955. Pascal was named first-team All-ACC in 1954 and 1955.

Mayock, who has lived most of his life in the Philadelphia area and now resides in Newtown Square, Pa., earned third-team All-America honors at Boston College in 1981. A standout defensive back, Mayock posted 12 career pass interceptions and was named the ECAC defensive player of the year as a senior. A first-team All-East selection that year, he was drafted on the 10th round by the Pittsburgh Steelers and played two years in the NFL with the New York Giants. After retiring from pro football, Mayock has served as an announcer covering college football for Fox Sports Net, CBS and ABC. He currently works for the NFL Network and is their lead expert on the NFL collegiate draft.

Schweickert, originally from Richmond, Va., was a true triple threat as a quarterback for the Hokies completing his career as the schools’ career record holder in passing, rushing and total offense, as well as finishing second in career punting. Playing for Coach Jerry Claiborne while in Blacksburg, Schweickert earned third-team All-America honors in 1963, then garnered first-team All-America accolades in 1964 by Look Magazine and the FWAA, and posted a 14-6 record as a starter in his final two seasons. Drafted in the third round of the 1965 NFL Draft by the San Francisco 49ers, Schweickert played two seasons (1965, 1967) with the New York Jets.

Glover, originally from Upper Marlboro, Md., starred as a center for former head coach Bobby Ross at Maryland, helping the Terps to ACC titles in 1983 and 1984. He earned first-team All-America honors from The Sporting News in 1984 and was honored as first-team All-ACC in the same year. In his final two seasons in College Park, Maryland was undefeated in 10 conference games, posting a 17-7 overall mark. In his senior season, the Terrapins were ranked 6th nationally in total offense and 8th nationally in scoring offense. Drafted in the second round by the Detroit Lions, Glover enjoyed a 15-year NFL career–13 of which were with the Lions–and was selected to the NFL’s Pro Bowl for three consecutive years (1996-98).

Ivery, who is residing in his hometown of Thomson, Ga., set the then-NCAA single-game rushing record in 1978 with 356 yards in just 26 carries on a frozen, wind-swept field against Air Force in Colorado Springs. A second-team All-America selection that year, Ivery had touchdown runs of 57, 73 and 80 yards in averaging 13.7 yards per carry against the Falcons. He totaled a Georgia Tech school record of 1,562 yards for the season and 3,517 yards for his career despite spending most of his time at Tech sharing the football in a wishbone offense. A first-round draft choice of the Green Bay Packers in the 1979 NFL Draft, he enjoyed an eight-year NFL career, all with Green Bay.

Burden, a native of Raleigh, NC, was named the ACC’s 1973 Player of the Year after leading the conference in rushing with 1,014 yards and leading the Wolfpack to the ’73 ACC Championship. Burden also shared time with three other talented running backs in the NC State backfield, teaming with Charley Young, Stan Fritts and Roland Hooks to form the famed “Stallions backfield” as the quartet fueled Coach Lou Holtz’ potent split-back Veer offense. The foursome went on to play a combined 22 seasons in professional football. Burden enjoyed a record-setting eight-year career in the Canadian Football League during which time he managed to rush for 6,234 career yards, including a then CFL-record 1,896 yards in 1975 for Calgary earning CFL player of the Year honors.

Bryant, a native and current resident of Tarboro, N. C., is one of the most talented running backs in ACC history who helped lead North Carolina to the 1980 ACC title. Bryant rushed for over 1,000 yards in three consecutive seasons, despite having a potential monster season in 1981 limited to just seven games due to injury. That year. in less than seven complete games, Bryant rushed for 1,015 yards and 17 touchdowns before suffering a season-ending knee injury. He still holds NCAA records for touchdowns scored in two (11 TDs) and three (15) consecutive games. Another who shared playing time in a crowded backfield with talents such as Amos Lawrence, Ethan Horton and Tyrone Anthony, Bryant still ranks fourth in career rushing at UNC and earned two first-team All-ACC selections. A seventh-round draft choice of the Washington Redskins in the NFL, Bryant instead played three seasons in the USFL with Philadelphia (1983-84) and Baltimore (1985)–rushing for over 4,000 yards in three seasons–before completing his pro career with the Redskins (1986-90).