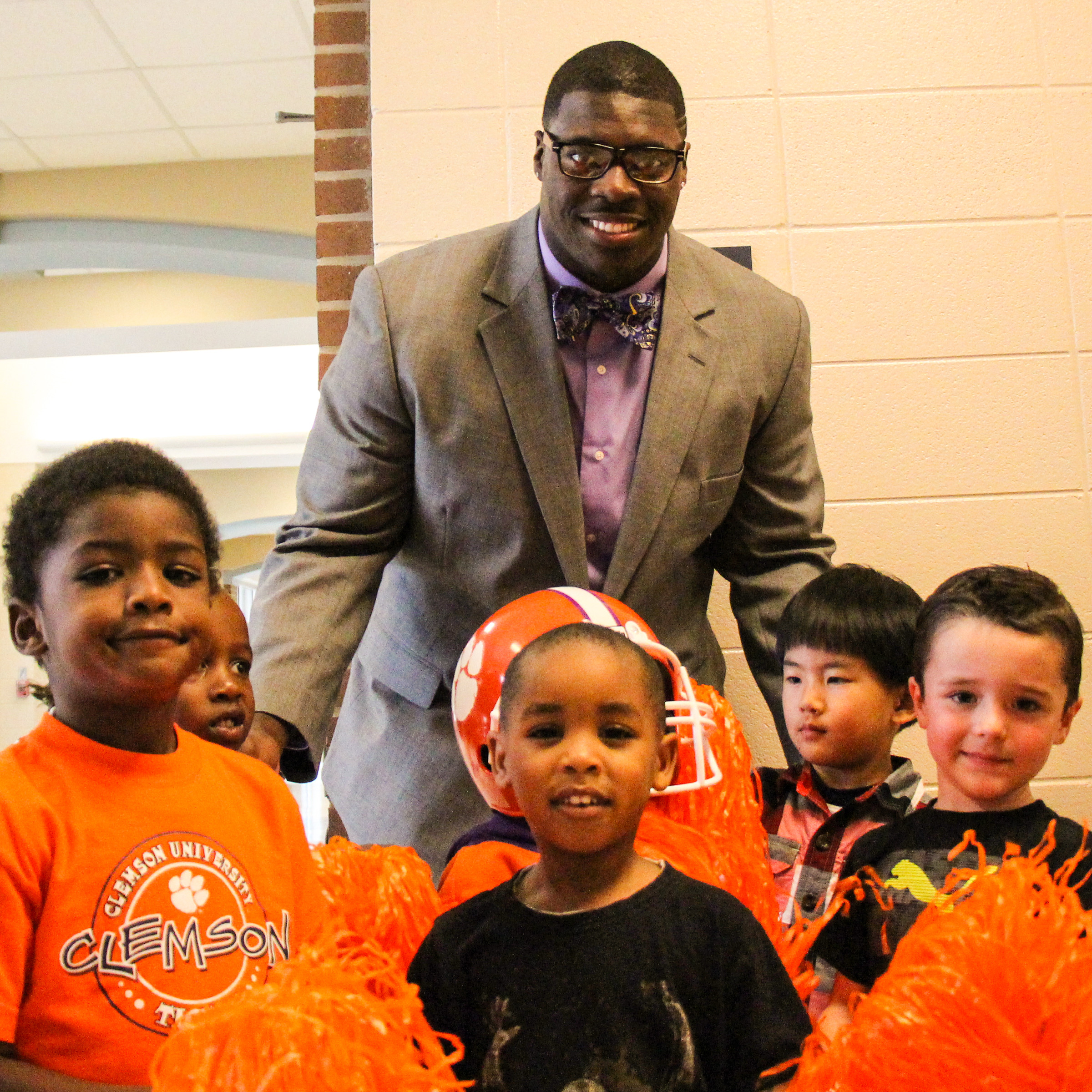 A Visit from Their “Heroes”

Two young girls took a brief break from recess to ask a few visitors on the other side of the fence what they were doing at Clemson Elementary. When the staffers responded that the Tiger football team was on its way for a visit, the two girls screamed in unison and ran to the playground to tell anyone within earshot.

And that’s the way the team’s visit to Clemson Elementary went, with youngsters of all ages lining hallways to give the Tigers the proper sendoff on their way to Winston-Salem to play Wake Forest on Thursday.

“I had never heard of this tradition,” said school principal Michelle Craddock. “It came up last year, my first year at Clemson Elementary. We were discussing a plan for the parade. They told me the Clemson parade, so I’m thinking it’s something downtown. They told me, ‘No, the Tiger football team parade.’ I heard great tales of how the team shows up, they decorate the halls and play Tiger Rag. It got booked, the team showed up, and it happened like everyone said. It’s quite a spirited event, for sure.”

It was spirited once again Wednesday when the police caravan leading the four team buses pulled into the parking lot shortly before 1 p.m. It’s a tradition that dates at least 30 years when the school was known as Morrison Elementary, according to head athletic trainer Danny Poole, who led the Tigers off the first bus alongside head coach Dabo Swinney.

Craddock spoke with pride when asked about the outpouring of support shown toward the Tiger football players and coaches.

“In some ways, surely they know they are heroes to a lot of these kids,” she said. “This event is evidence of it. The pom-poms, the helmets and the spirit displayed is our kids’ way of thanking them for providing entertainment for us. As a community, it’s something we enjoy and are blessed to have. We live in the Clemson community, but going to games is not always a possibility for some of these kids. The fact they can be here with these stars and young men they look up to, it can be a once in a lifetime opportunity for so many students.”

It’s not only a hit with the elementary students, but also the Clemson players. One such example is Clemson native DeShawn Williams, who attended the very school he walked through Wednesday for the last time for this annual tradition.

“It’s important to everyone, especially guys like myself and Shaq (Lawson) since we went to school here,” Williams said. “To see some of the old teachers still here from when I was here, and to see the appreciation they have for what you’re doing, it really humbles you.”

And it’s a tradition that puts a huge smile on the faces of everyone involved.