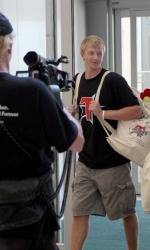 A Special Moment: ABC Chronicles the Story of Tanner’s Totes

ATLANTA, GA – The cameras were not even on, but fortunately for the kids at the Children’s Healthcare of Atlanta at Scottish Rite Hospital, Tanner Smith was on.

Though he was handing out his now famous Tanner’s Totes in front of the glitz and glamour of a Koops Production crew shooting for ABC, Smith, a starting guard on the Clemson men’s basketball team, took extra time to visit with each child whether the cameras were rolling or not.

Smith talked to the patients at Children’s Healthcare of Atlanta as if they were his own family or dearest friend. He listened to them as he shared a few laughs and hugs along the way.

“The emotion you get in a place like that is unmatched,” Smith said. “I don’t think you can compare it to anything else. You get swarmed by every possible emotion. You are feeling for these kids that are going through a tough time, but at the same time you’re happy that they are excited they got a Tanner’s Tote.

“You can see hope in their eyes. You can see it in the family. They are so appreciative. You can see how much the kids are fighting to live, so the emotions are all over the place. It is amazing. To be there, to help out and make them smile for at least a little while is exactly why we do Tanner’s Totes.”

And that’s why Koops Production chose Tanner Smith Totes and his story for a television show this fall called Everyday Health. The episode featuring Smith’s story is expected to air sometime around late October or early November.

The show will be hosted Laila Ali, a world-class, elite athlete, Ethan Zohn, a former professional soccer player and humanitarian, and Jenna Morasca, champion of Survivor: The Amazon. The series, derived from the popular health brand of the same name, will air on over 95 percent of the country’s ABC affiliates, including ABC-owned stations, beginning September 3 at 11:00 AM.

“I have the best job in the world. I get to travel the country and find the most inspirational people and help share their story with the world,” said Zohn, who hung out with Smith and his family Monday through Wednesday in his hometown of Alpharetta. “Tanner and his story with Tanner’s Totes is a slam dunk.”

The show’s altruistic message hits close to home for Zohn, the former champion of Survivor: Africa, who used his million dollar prize money to co-found a non-profit organization in 2002. Zohn was then diagnosed with CD 20+ Hodgkin’s Lymphoma in 2009, and Jenna Morasca, his long-time girlfriend, was thrust into the position of being his caregiver.

“I know if I got one of Tanner’s Totes, things would have been a little bit different,” Zohn said. “There are days when you just want to give up. You feel miserable. You can’t eat, you can’t sleep and your hair is falling out. You are tired, but if I got one of those tote bags, it would have changed things.

“I really respect what he is doing.”

Smith used the three days of filming with ABC as another opportunity to raise money for Tanner’s Totes. According to his parents, Craig and Kathy Smith, more than $6,500 was raised for Tanner’s Totes during the time in which the production crew was in the Atlanta area.

“It has been just amazing,” said Kathy Smith, Tanner’s mother.

During their time at the Smith household in Alpharetta, the crew captured Smith telling the story of how Tanner’s Totes began, showed him filling tote bags, showed a fund raising event at his old high school, and then showed him handing out totes to the patients at Children’s Healthcare of Atlanta.

“The show is looking for exactly the title, `Everyday Health Heroes.’ We are looking for people who have noticed something in their community that needed to be done, and then went out and made a difference,” said Kristen Alexander, one of the show’s producers. “When we found out about Tanner and what he was doing, his social consciousness was so impressive, so we had to come here and meet him.”

Though the extra media coverage is good for Smith, his family and the Clemson men’s basketball team, Smith appreciates what the show is doing because it gives Tanner’s Totes a chance to expand its horizons. And that means it gives a sick little boy or girl, who is in desperate need of cheer, a reason to smile.

“That’s why we do it,” Smith said. “It is really a special moment.”

Note: For more on Everyday Health please visit its Web site at www.EverydayHealth.com.