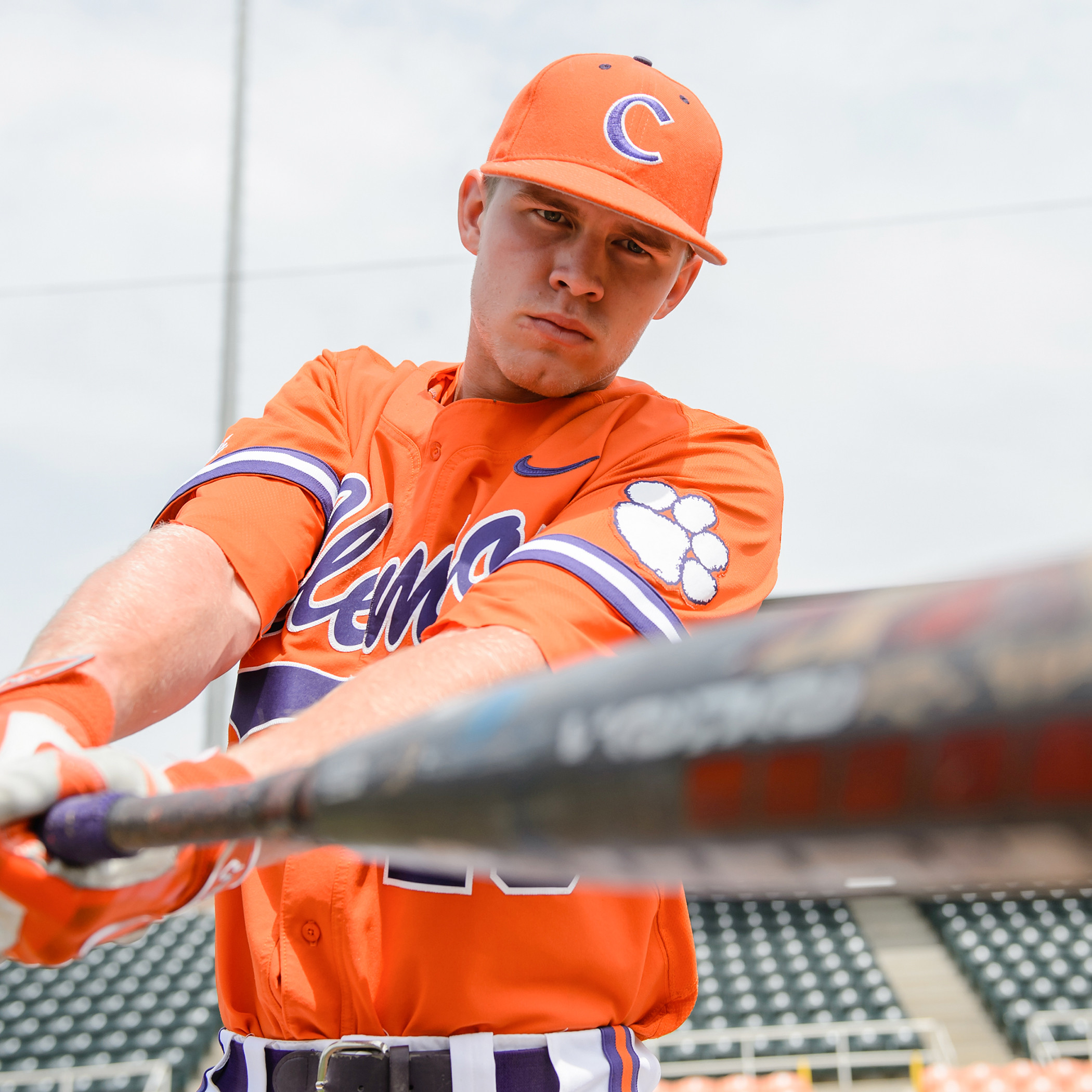 It may have been a ruptured Achilles heel that brought him to Clemson, but fortunately for the Tigers, freshman Seth Beer has been anything but since donning the orange and purple.

“Clemson was not on my radar,” said Beer of his path to Tigertown. “My mom had torn her Achilles heel playing tennis, and my sister had a volleyball camp up here, and my mom said, ‘Seth, you have to drive her up here. Why don’t you call coach (Bradley) LeCroy and see if you can meet up with him and walk the school while she’s at this camp, and you can go enjoy that.’ So I said, ‘Ok, mom.’

“I’ve heard from a bunch of people that when you find a school you want to go to, you instantly know. And I got on campus, and I said, ‘This is where I want to go to school.’

“I hadn’t talked to the coaches, I hadn’t seen the field or anything else, but I knew this is where I wanted to go play baseball. Then, obviously, we got to see all the cool stuff they’ve got going on over at the stadium, and I knew this was where I wanted to further my education and get my degree and get to come back to all the time.

“After that, I was all thinking Clemson. Everything I was wearing during that time was all orange and purple, and it obviously hasn’t changed since then. I’m happy to be here, and I love it. I love this community, and I wouldn’t trade it for anything.”

The Tigers wouldn’t trade Beer for anything, either, as the should-be-senior-in-high-school freshman has made quite the loud impact on the diamond since blasting a grand slam for his first college home run in the first series of the year. From dynamic plays in right field to ultimately breaking the Clemson freshman home run record, he has repeatedly supported head coach Monte Lee’s claims that Beer is the best freshman that Lee has ever coached.

Beer credits much of his success to his teammates and coaches, saying that their support and leadership made his early transition to college baseball much easier. That support has been there since the outset of his Clemson journey, and Beer pinpointed an early exchange with Lee that served as the “aha” moment that sparked his performance at the plate.

“It was during spring practice when we were getting ready,” remembered Beer. “I came in there and I was going to be a guy who struck out every at-bat if I played like that. I came in and there was a lot of pressure on me, but not from anybody else, just from myself and trying to show myself.

“I remember coach Lee pulling me aside, and he said, ‘Seth, this is the same game we’ve played our whole lives. You don’t need to change anything. Just go out there and have fun and compete the way you did in high school and summer ball, and it’ll come.’

“I took that to heart. I remember the next at-bat I laced a ball into center field, hit it square on the barrel and I rolled into first base, and I said, ‘well, I haven’t touched the base yet this spring.’ I got to first base and said, ‘I can compete here.’ That relaxed me with the understanding that I was meant to be here, and I can do this.”

As surprising as it may seem, Beer had little baseball influence when he was young, as his father played linebacker in college. But the freshman said that his family supported his baseball endeavors from when he was three and playing wiffle ball in the yard.

“We would go out in the front yard, and my mom would sit there and throw me Little Tikes balls over and over. I remember her telling me that she told my dad, ‘he hits lefthanded. None of us are lefthanded.’ And my dad told her, ‘just let him do it.’

“My dad was a middle linebacker in college and didn’t know much about baseball, but he did know this, ‘lefties are special guys when it comes to hitting, so leave him.’ So my mom would throw wiffle balls every day, over and over. I remember I would run around the bases and I would tell my mom to be the crowd, so she would have to cheer as I pretended to run the bases.

“From there, it just carried. It was a big part of my life, and trying to tag team that with swimming at the time was really tough as well. My mom wanted me to pursue my dreams, whatever way that was, enough that she decided to homeschool me. So I was swimming at 5:30 in the morning, and I’d get out of the pool around 9 a.m., go home and take a nap, and then go to baseball practice…that was my summer schedule. It was tough, but I enjoyed it and made a lot of memories, not only with my mom, but also through swimming and baseball.”

Beer, who was a national champion as a teenager in the pool, was once considered to potentially be the next Michael Phelps, but he said that one of his summer baseball coaches, former major leaguer Paul Byrd, told him that he had a “big-league-type swing,” and he was sparked from there to see himself as a baseball player as opposed to a swimmer.

Fast forward a few years, and Beer found himself taking seven core classes during his junior year of high school in preparation to graduate a semester early and enroll at Clemson. Fast forward a few more months, and he closed out his freshman season leading the Tigers in batting average (.369), home runs (18), slugging percentage (.700), walks (62) and on-base percentage (.535). He also had a 26-game hitting streak and ended the year with a 60-game on-base streak.

Beer received the Dick Howser Trophy as national player-of-the-year, the first freshman in history to win the award. He was named ACC Player-of-the-Year and ACC Freshman-of-the-Year, the first player to win both in the same season. He also became Clemson’s first freshman to earn first-team All-America honors and was invited to play with the USA Baseball Collegiate National Team over the summer, an honor that he said is particularly meaningful.

“There’s a lot of great ballplayers in the country, and to be noticed as one of those guys who could be a part of the Dick Howser Trophy or Team USA, it’s an honor,” expressed Beer. “I couldn’t ask for anything more. Being recognized as a freshman for things that I’ve done on the field is a pretty cool experience.

“Team USA was probably the biggest honor, one of the biggest honors I’ve ever had in my life. I think it goes emotionally along with the passing of my grandfather (earlier this year). He was a Marine, and I used to sit on his lap when I was really little and he used to tell me stories about how much he loved his country.

“Now, I get to experience the feeling that he had when he goes into salute and sings the national anthem. I’ll be able to get a small sliver of what that feels like to be a part of something for your country and to support it. I think that was probably the coolest experience about that. I know he’s looking down and he’s smiling and proud of me. Obviously, I’m really proud to be able to represent the United States of America.”

Beer also represented Clemson well this season, helping lead the Tigers to an ACC championship and top-eight national seed as their first regional host since 2011. The freshman said that he has gained just as much from his first year as a Tiger as he has contributed to the program, and that he has no regrets regarding his unique experience in Tigertown thus far.

“That and beyond,” reflected Beer of Clemson living up to his expectations. “I’ve learned so much, not only as a baseball player, but as a student and as a person. Coming here, I’ve grown up so much. When it came to managing time to knowing where to be at certain times, because I’ve been lost so many times, but all of that has helped me grow up not only as a player, but as a person. I think that’s been huge for me, and I’m really happy I came this route.

“I wouldn’t trade it for anything, and obviously no regrets with that. There are tough times, but I’m 100 percent bought into what Clemson has going on here, and I love it so much. I have no regrets whatsoever. I don’t think I’ll ever have regrets. I love this place.”