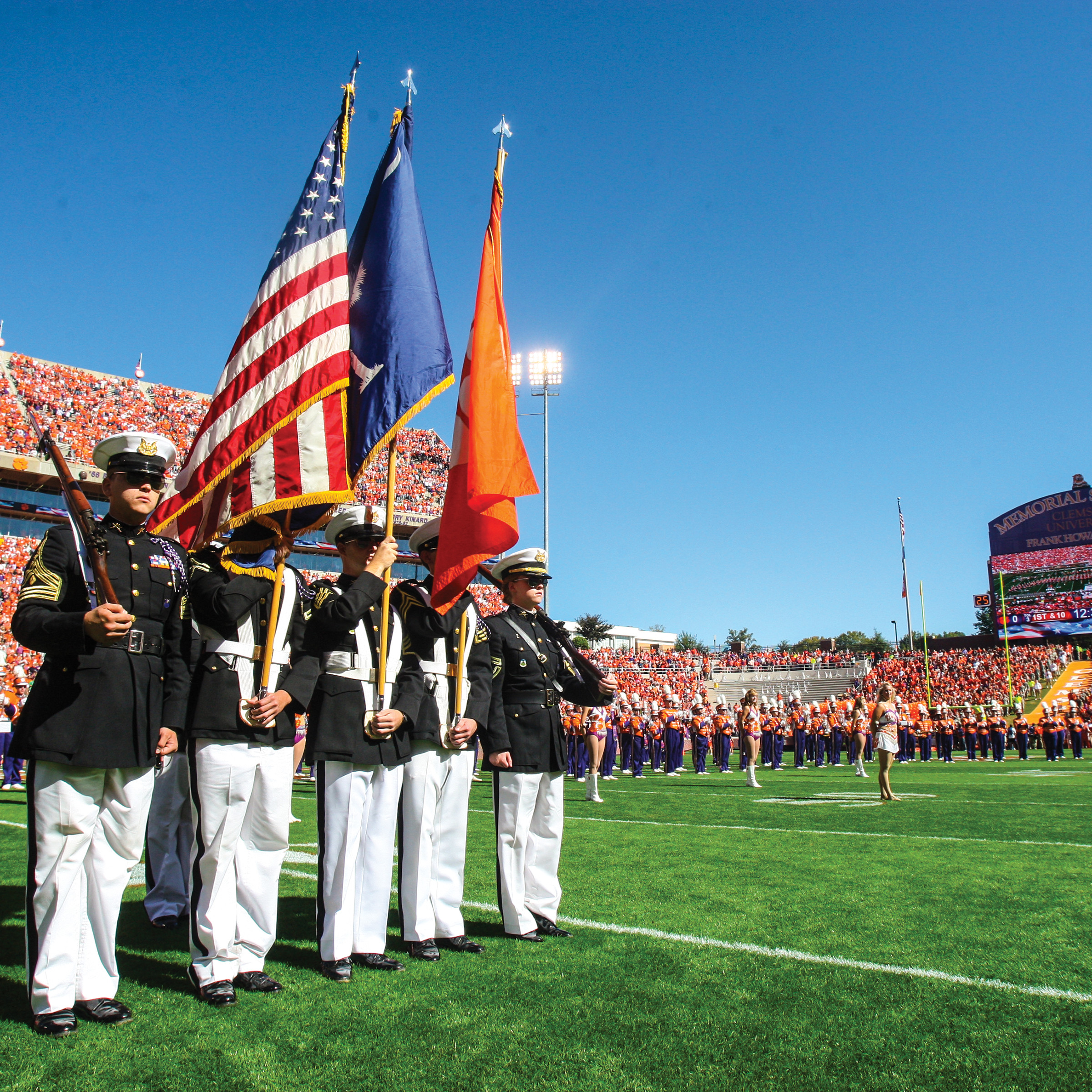 A Meaningful Day in Tigertown

by Sam Blackman One of the featured events surrounding the Clemson football season is Military Appreciation Day. This day is set aside each season to pay tribute to the brave men and women who have served and are currently serving in the United States’ Armed Forces.   It is also a day that pays tribute to those who have fallen in the nation’s conflicts that are from the State of South Carolina.  It all started when the Clemson Senior Platoon had a reunion in 1994.The Clemson Senior Platoon was one of the most renowned groups representing Clemson when the college was a military institution.  Each year in the spring, approximately, 100-150 Clemson cadets would try out for the prestigious drill team.   After several weeks of training and initiations, the group was narrowed to 50 for the 43-member group.   The fast-stepping (double cadence) drill unit performed intricate maneuvers during its routine and always ended its show with the Queen Ann salute.  Part of the routine included the drill team shouting “Beat Car-o-lina, Beat Car-o-lina,” encouraging the athletic teams to defeat rival South Carolina in the various athletic contests.   “Because of Clemson’s military heritage we think that it’s important that we recognize the sacrifice of our veterans and the ones who have died in our nation’s wars and conflicts,” said Mike Money, Clemson’s assistant director of marketing and game management. Clemson Military Heritage includes a rich tradition of educating military leaders as each person that enrolled at Clemson were members of the ROTC.  Clemson was a military school from the day it opened in 1889 until 1955 when the college became coeducational.   “John Seketa and a military committee on campus all helped in starting the event and we want to carry out the tradition that they started, and it is a privilege to do that.”From military flyovers to the recognition of families who have lost love ones in war, many observances and tributes have been made since the event started in 1994.     Military Appreciation Day started back in 1994 when Clemson’s Senior Platoon was having a reunion and they wanted to bring attention to Clemson’s Military heritage.   After the events of September 11, 2001, Clemson started to do more by paying tribute to the fallen soldiers and recognizing those currently serving and those who had served. “My father was a sailor on the USS New Orleans in World War II and it’s only appropriate that we pause and remember those that have bravely served and are serving in our military” said John Seketa, retired Assistant Athletic Director who has helped coordinate Military Appreciation Day since 1994. Seketa feels as though Clemson has set the standard for others in staging Military Appreciate Days.  He was recognized by the ACC as being a leader in starting this great tradition.  “The 2002 Super Bowl was a replica of Clemson’s tribute just 11 days after 9/11 however on a larger scale with big name entertainers while we had Tiger Band and all the choruses on campus playing and singing patriotic songs,” said Seketa.  “We both scrolled the names of those killed on 9/11 on the video boards.  We both had a message from an important government official.  Clemson’s was by a U.S. Senator and the Super Bowl’s was by former Presidents.  Sitting there watching the pregame and halftime show was very emotional since those who helped coordinate Clemson’s tribute to 9/11 had just 11 days to execute what many would consider as one of Clemson’s finest days. “Each year the President’s Office, Tiger Band, Clemson ROTC and Clemson Athletics get hundreds of emails of appreciation from fans, families of fallen soldiers and visiting fans in attendance for another emotional pregame and halftime show.” said Seketa.  Last year at the 2013 Military Appreciate Day a new tribute was added and this was to bring attention to the Purple Heart Medal.    “The idea of having a Purple Out was a student-driven initiative that we put in motion,” said Money  “In this concept, we could highlight Clemson’s Military Heritage.  Since one of our colors is purple we encouraged our fans to wear purple and at the same time pay tribute to the military. This year we had a hero of the game where we paid tribute to someone who had won a Purple Heart,” said Money. The proceeds of the Purple Military Appreciation T-Shirts go to the various military groups on campus. This year Clemson was named a commemorative partner through the government to recognize and pay tribute to the 50th Anniversary of the Vietnam War.    The 2014 festivities are sure to be dignified and meaningful, something that Clemson and Georgia State fans can be proud of as they spend a Saturday afternoon in Tigertown. “We appreciate what our current ROTC, veterans and fallen soldiers have done for Clemson, our country and many countries around the world,” said Money.   Military appreciation day is very important and we look forward to this event each year, and we know what it means to people.”