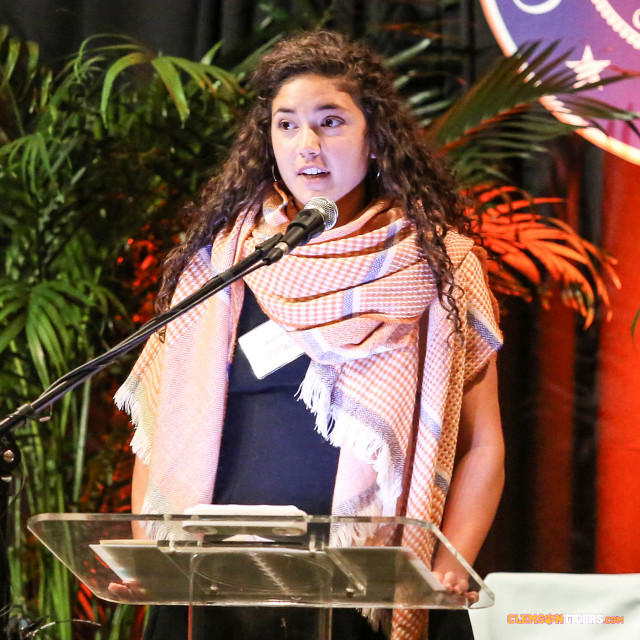 Senior rower Emily Radziwon had a normal beginning to her athletic career, crediting her family and friends for getting her into the sport.

“I first started rowing when I was a freshman in high school. A couple of my cousins actually rowed, and they told me, ‘You have to try it.’ So finally one day, one of my friends from my high school actually rowed at the same club and said, ‘Why don’t you come with me one day?’ I went with her and fell in love with the sport.”

Radziwon, a native of Orchard Park, N.Y., chose to attend Clemson after her visit.

“I was taking a bunch of official visits, and I never really fell in love with a campus and a school as much as I did with Clemson. So it was sort of last minute. I came on my official visit in November and decided to commit a few days later.”

Radziwon credited the family atmosphere of Clemson for helping her make her decision. She also enjoys the camaraderie she shares with her fellow student-athletes at Clemson. This atmosphere and camaraderie helped make the transition to a college far from home a little easier.

“It’s definitely a weather transition, for sure. It’s a lot colder up in Buffalo.

“Our facilities here are incredible, and with the coaches and the help of my teammates, the transition wasn’t as hard for me. I’ve always been really independent, so going away from home wasn’t something that was too daunting or scary for me.”

Radziwon also credited the environment of the South for helping ease her transition.

“A lot of people say, ‘People down South are so much nicer,’ which, to a certain extent, they definitely are, but I think that environment is a lot more lax and a lot more chill, whereas up North, people are more go-go-go. I definitely notice a difference between the people in South Carolina versus Buffalo, which made the transition very easy.”

Since coming to Clemson, Radziwon has immersed herself in the university. She is not just a student-athlete…she has spoken at multiple events on campus, affording her the opportunity to develop a bond with president Jim Clements, which she describes as her most memorable Clemson moment.

Radziwon’s speaking duties did not end there. She has spoken at numerous other events through her involvement with multiple organizations on campus. She spoke at the Solid Orange Family Reunion Picnic about what the Sustainable Agriculture Program mission was with the student-athlete body and their mission in general, as she serves as president.

Radziwon has spoken at two Cornerstone events, giving an award for donors who gave over $2.5 million as well as sharing her experience at Clemson and how the donations have and will continue to benefit her as a student-athlete. She is also the director of the Palmetto Series Canned Food Drive, and she spoke with a news channel for that as well. When speaking for this organization, she raises awareness about where the donated food and money goes and how it can help those in need to help tackle food insecurity in South Carolina.

Public speaking may be scary for many people, but it does not faze Radziwon.

“Honestly, I’m a really outgoing, social person. Public speaking isn’t that daunting to me. The people who I’m meeting and speaking alongside with are kind of scary in a sense because these people are looked up to, and they’re such leaders in our community. But overall, I love speaking. I love using my platform that I have as a student-athlete to encourage and inspire the rest of the student-athletes and also regular students as well.”

On the water, Radziwon has seen sustained success. In high school, she competed in the U.S. Rowing Youth National Championships twice, which she described as an honor.

“It’s actually incredible because you realize the talent that’s around. You’re stuck in this bubble for awhile, and then you go all the way out to California, you go to Tennessee and it’s like, wow, there’s a lot of fast crews all across the country. It’s a little intimidating, but it’s such an honor to be around those people and a confidence booster to know that you were good enough to get here, so seeing the talent that there is around the United States in terms of women’s rowing is inspiring.”

These competitions helped prepare Radziwon for collegiate competition by showing her the talent levels of other rowers across the nation.

“What it made me learn was that there is that talent. There is that competition out there, even though you might be training every single day and thinking, ‘I got this. I got this next race.’ There’s always going to be a team that gives you a run for your money, and that’s what it definitely made me realize.”

Radziwon puts her public speaking skills to use in rowing as a vocal leader on the team. Her time at Clemson has not only made her a better leader, but it has helped her determine what kind of leader she is.

“I’ve always had leadership qualities and leadership skills, but during my time at Clemson, I’ve learned what type of leader I am. I’m more of a ‘rah rah, let’s go,’ very vocal leader, whereas others either lead exactly by example or they’re more ‘listen to my teammates and take that up to the coaches.’

I love getting in there, getting it with my teammates. That is something I’ve really learned over my four years at Clemson. In order to lead your team and your teammates, you definitely have to lead yourself first. Understanding what motivates me, what inspires me every day has helped me lead my team.”

Mirroring her involvement with organizations like SAP and the Palmetto Series Canned Food Drive, Radziwon has an interest in nutrition and healthy eating. She likes to inspire people, and to help her do so, she runs an Instagram account in which she posts pictures of food that she cooks and eats.

Radziwon is unclear on which direction she wants to take with her future after college, but she is sure that she wants to work in the health industry.

“I’m a health science major, health promotion and education concentration, so I want to inspire others and with my story about how I used to be really inactive and really overweight when I was younger, but now I’m a Division I athlete and strive to help the community and build young kids up to become role models in the community.”

With public speaking and leadership qualities and a clear passion for the community, there is no doubt the future has great things in store for this Tiger.