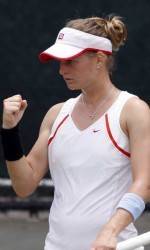 What: NCAA Tournament Round of 16

ATHENS, Ga. – The Clemson women’s tennis team, the ninth overall seed in the NCAA Tournament, will take on 8th-seeded Stanford in the Sweet 16 on Thursday at 6:00 pm at the Dan Magill Tennis Complex. Clemson (24-5) enters the match as winners of the Clemson Regional, defeating College of Charleston 4-0 and #19 Georgia 4-2.

The match will be available to watch online courtesy of georgiadogs.com. Live scoring will also be available. The winner will take on the winner of the #1 Baylor v. #16 Texas matchup on Saturday in Athens.

Stanford (22-1) won their regional in Palo Alto, CA, defeating Fairfield and #31 Southern Methodist University by 4-0 margins. The Cardinal are the only one-loss team in the nation, and have a home winning streak of more than 140 matches.

The Cardinal have the historical edge, with a 9-0 mark against Clemson. Stanford has knocked the Tigers out of the NCAA Tournament five times in history, including in the Sweet 16 in 2008 and in the Final Four in 2005.

The teams don’t see each other often, but three current Tigers played in the 2008 Sweet 16 match in Tulsa, OK. Also, there were two Tiger/Cardinal showdowns at the ITA All-American Championships, as Keri Wong defeated Lindsay Burdette in the qualifying round, then teamed with Nelly Ciolkowski to defeat Burdette and Carolyn McVeigh in doubles.

However, Clemson does of good history in Athens. Each of Clemson’s Final Four runs have come in Athens, and the Tigers hold a 4-3 mark in NCAA play there over the last seven seasons.

Nancy Harris has led the Tigers to a fourth consecutive Sweet 16, and the sixth in the last seven seasons. She has a 19-10 record in the NCAA Tournament, and has advanced to at least the second round in nine straight seasons. Clemson’s 24 wins is the fourth-most in school history, and the second-most under Harris.

If the Tigers finish the season ranked in the top ten, it will be only the fourth time in school history, but the 26th time in the top 25.

Clemson’s three All-ACC performers came up big during the regional. Against College of Charleston, Ina Hadziselimovic all posted straight-set wins and won in doubles. Against Georgia, Bek split two tiebreaker sets against #14 Chelsey Gilchrist, while Keri Wong posted an upset over #48 Nadja Gilchrist at flight two. Hadziselimovic was the first tiger to finish with a 6-3, 6-1 win to move her alone into 10th in school history in singles wins.

After the team championships, the NCAA Singles and Doubles championships will take place in Athens form May 26-31. Bek has earned a bid in singles, while she and Hadziselimovic are a national seed in doubles.