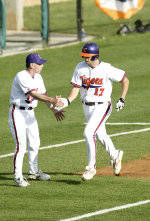 Jason Berken (7-3) earned the win in a scheduled short start. He pitched 4.0 innings, allowing four hits, two runs, and one walk with four strikeouts. Four other pitchers held the Blue Devils scoreless in the final 5.0 innings to close out the game. Duke starter Jimmy Gallagher (1-5) suffered the loss, as he allowed six runs on eight hits in 6.0 innings pitched.

The Tigers jumped out to a 2-0 lead in the first inning. Brad Chalk singled up the middle with one out, went to second on a passed ball, advanced to third on a throwing error by the pitcher, and scored on a sacrifice fly in foul territory by Travis Storrer. Tyler Colvin followed with a line-drive, opposite-field, solo home run to left-center, his ninth of the season.

Duke came right back and scored a run in the bottom of the first inning. Gallagher led off with a double to left-center and went to third on Jonathan Anderson’s groundout to second. Brett Bartles followed with a slow roller to shortstop for a 6-3 putout, allowing Gallagher to score.

In the second inning, Marquez Smith led off with an infield single and D’Alessio hit a towering two-run homer just inside the right-field foul pole. Stan Widmann followed with a bunt single and went to second on Adrian Casanova’s sacrifice bunt. Widmann rounded second base too far and was caught in a “pickle,” but was able to beat the throw from second base and was safe at third. Herman Demmink then laced a triple down the right-field line to plate Widmann. The hit extended Demmink’s hitting streak to 10 games.

The Blue Devils kept up the scoring in the bottom of the second inning. Jonathan Nicolla led off with a double to right field and scored on Nate Freiman’s double down the right-field line.

In the third inning, D’Alessio crushed a 1-2 pitch over the fence in right field for a solo homer, his second of the game and 17th of the season. It was also his second two-homer game of the series, fourth of the season, and sixth of his career.

After three scoreless innings, the Tigers tacked on two runs in the seventh inning. D.J. Mitchell led off by being hit by a pitch and Storrer drew a walk to put runners on first and second with no outs. Colvin’s groundout to first moved the runners up a base, and Harbin grounded a single down the third-base line to plate Mitchell and Storrer.

Clemson will play host to #13 Florida State in a three-game series starting Friday at 7:15 PM. The game will be televised live by Sun Sports.