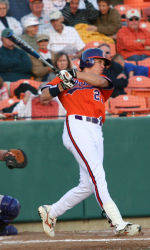 Clemson (21-8, 6-3 ACC), ranked as high as #7 in the country, will play host to Maryland (14-17, 6-9 ACC) this weekend in a three-game series at Doug Kingsmore Stadium. Game times are 7:15 PM (Friday), 4:00 PM (Saturday), and 1:00 PM (Sunday). All three games will be broadcast live on the radio by Clemson Tiger Sports Network. Live stats will also be available at ClemsonTigers.com for all three games.

The Series Clemson and Maryland have met 138 times on the diamond, with the Tigers holding a 103-35 lead in the series dating back to the 1923 season. Last year in College Park, MD, the Tigers won all three games by scores of 14-3, 6-4 (13 innings), and 12-0. Two years ago, Clemson swept the Terrapins at Doug Kingsmore Stadium. Clemson has won seven games in a row over the Terrapins dating back to an 8-4 Maryland victory in the second game of a doubleheader in College Park on April 19, 2003.

Maryland’s starter for game three has yet to be determined. Clemson will start junior righthander Stephen Faris (3-0, 1.79 ERA) on Sunday. The Richmond, VA native had made seven starts for a total of 45.1 innings pitched. He has a .187 opponents’ batting average, allowing 29 hits and seven walks with 38 strikeouts.

The Terrapins Maryland, led by sixth-year Head Coach Terry Rupp, enters the weekend series with a 14-17 overall record and 6-9 ACC mark after defeating Towson 5-3 on Wednesday and taking two of three games over #3 Georgia Tech last weekend. The Terrapins hold a 5-11 record on opponents’ home fields.

The pitching staff has a 4.89 ERA and .293 opponents’ batting average. The staff also has an outstanding 2.6 walks per nine innings pitched mark. Righthander Seth Overbey has a team-best 2.88 ERA in 15 relief appearances, while lefty Brett Cecil has eight saves and a 3.29 ERA in 17 appearances (one start). Maryland is fielding at a .954 clip as well.

The Tigers Clemson enters the weekend series with a 21-8 overall record and 6-3 ACC mark after defeating top-ranked South Carolina 3-2 in Columbia on Wednesday. The Tigers have won their last six ACC games, including a three-game sweep at #11 Miami (FL) last weekend. Clemson sports a 16-3 home record as well.

Sophomore Brad Chalk has 10 sacrifice bunts this season, giving 25 for his career. That figure is tied with Casey Stone (1998-01) for the most career sacrifice bunts by a Tiger in history.

The pitching staff has a 2.97 ERA and .239 opponents’ batting average. Both lefty Daniel Moskos and righty Steve Richard have four saves. Clemson is fielding at a .965 clip as well.

Tiger Victories Over Top-Ranked Teams When Clemson defeated #1 South Carolina in baseball on April 5, 2006 in Columbia, Head Coach Jack Leggett tied the Clemson coaching record in all sports for wins over a top-ranked team. It was Leggett’s fifth win over a #1 team, tying him with former Tiger Baseball Coach Bill Wilhelm and former Tiger Men’s Soccer Coach Dr. I.M. Ibrahim.

Overall, it was the 23rd time in history Clemson defeated a #1 team in all sports, including the 10th time in baseball. All 10 of those wins have taken place away from Doug Kingsmore Stadium.

Clemson has beaten a #1 team in baseball 10 times, and five of the victories have been by one run, including the win over South Carolina in Columbia, a contest the Tigers won 3-2. In fact, 11 of the 23 Tiger wins over top-ranked have been by one point, run, or goal.

Clemson Edges Top-Ranked Gamecocks 3-2 Tyler Colvin run-scoring double in the first inning. Robbie Grinestaff tied the score with a solo homer in the fourth inning. In the sixth inning, Colvin hit a two-out double and scored on Andy D’Alessio single to left. After the Gamecocks tied the score in the bottom of the sixth, Brad Chalk blooped a two-out single to right-center in the seventh inning to plate the winning run. The game ended on a line-drive double play off the bat of Michael Campbell with the tying run on second base. Colvin had a game-high three hits, as the Tigers out-hit South Carolina 10-8. Clemson also snapped the Gamecocks’ 20-game home winning streak.