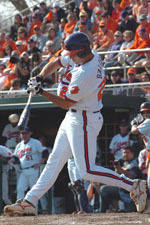 Righthander Jacob Thompson pitched 8.0 solid innings to lead #6 Virginia to a 5-3 victory over #13 Clemson on Friday night in front of 5,192 fans at Doug Kingsmore Stadium. The Cavaliers took a 1-0 series lead, and improved to 33-8 overall and 12-6 in the ACC, while the Tigers fell to 25-12 overall, 10-6 in the ACC. It was also Virginia’s seventh straight win over Clemson.

Thompson (9-0) allowed six hits, three runs, and one walk with six strikeouts to earn the win. Casey Lambert earned his eighth save of the season by pitching a scoreless ninth inning.

Daniel Moskos (3-3) suffered the loss, as he allowed six hits, four runs (one earned), and three walks with a career-high-tying seven strikeouts in 3.2 innings pitched. Righthanders D.J. Mitchell and Alan Farina pitched 5.1 innings in relief, combining for one unearned run on five hits while striking out seven.

The Cavaliers took a 1-0 lead in the first inning. Greg Miclat led off with a single to third base, stole second, and advanced to third on a flyout. Sean Doolittle drove in Miclat with a single up the middle.

The Tigers then tied it up in the second inning. Andy D’Alessio led off with a single through the right side. Two batters later, Ben Paulsen singled up the middle, advancing D’Alessio to third. D’Alessio then scored on a sacrifice fly by Doug Hogan.

Virginia answered right back to take the lead in the fourth inning. With two outs, Mike Mitchell reached on a fielding error by second-baseman David Bunnell and later stole second. Miclat drew a walk, and then Mitchell and Miclat each stole a base. Brandon Marsh followed with a double to left-center just beyond the reach of a diving Addison Johnson that scored both Mitchell and Miclat. Doolittle then singled to left field to score Marsh and put the Cavaliers on top 4-1.

Andy D’Alessio crushed a two-run homer on a 3-2 pitch over the fence in right field to bring the Tigers within one in the sixth inning. It was D’Alessio fifth home run of the season.

The Cavaliers added a run in the seventh, as Brandon Guyer scored from third on a passed ball.

In the ninth inning, pinch-hitter Alex Burg singled to right-center with two outs. Hogan followed with a walk, and both runners moved up on a wild pitch. But Alex Lee struck out with the potential tying run on second to end the game.

The Cavaliers outhit the Tigers 11-7, but left 13 on base. Doolittle went 3-for-4 with two RBIs to lead Virginia. The Cavaliers were also a perfect 9-9 on stolen bases. D’Alessio led the Tigers with two hits, including a two-run home run.

The series continues at 7:00 PM on Saturday and concludes at 1:00 PM Sunday.