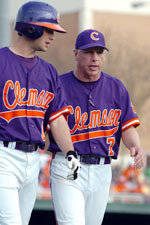 Clemson (24-8), ranked as high as #5 in the nation, will travel to Cullowhee, NC to take on Western Carolina (19-13) on Tuesday at Hennon Stadium. It will be the second and final meeting between the two during the regular season, as the Catamounts defeated the Tigers 8-6 last Tuesday at Doug Kingsmore Stadium. First pitch is scheduled for 7:00 PM. The game will be broadcast live on the radio by WCCP (104.9 FM) out of Clemson. Live stats will also be available at ClemsonTigers.com for the game.

LeClair to Be Honored Prior to Game Prior to the game between the Tigers and Catamounts on Tuesday in Cullowhee, Western Carolina will retire the #23 jersey of former Head Coach Keith LeClair in a special ceremony. LeClair played and later coached under Jack Leggett at Western Carolina. In 2002, LeClair relinquished his head coaching duties at East Carolina due to health concerns related to ALS (also known as Lou Gehrig’s Disease).

The Series Clemson and Western Carolina have met 57 times on the diamond, with the Tigers holding a 47-10 lead in the series that dates back to 1974. The two teams played last Tuesday, April 4 at Doug Kingsmore Stadium, as the Catamounts came out on top 8-6 to break Clemson’s 35-game home winning streak in the series. In 2005, the Tigers won both meetings, including 7-4 in a game that started in Cullowhee on April 12 and ended at Clemson a week later due to wet field conditions at Hennon Stadium. The two teams have played at least one game every year since 1978.

The Starting Pitchers Western Carolina will start junior righthander Tyler Johnson (2-0, 5.87 ERA) on the mound Tuesday. The Lynnwood, WA native will be making his second career start, as he has previously made 10 relief appearances and one start for a total of 23.0 innings pitched. He has allowed 26 hits and nine walks with 16 strikeouts. Johnson started against the Tigers last Tuesday in his only previous start. In 4.0 innings pitched, he allowed five hits, two runs, and two walks with one strikeout in Western Carolina’s 8-6 victory. The first-year Catamount, along with teammates Tim Hallam (SS) and Bryan Tupper (RHP), attended the same junior college (Edmonds Community College) as Tiger rightfielder Travis Storrer.

The Tigers will counter with sophomore righty P.J. Zocchi (2-0, 5.48 ERA) on Tuesday. The Bronx, NY native has made three starts and five relief appearances for a total of 23.0 innings pitched. He has allowed 30 hits and 12 walks with 29 strikeouts. In two career outings against the Catamounts, Zocchi has allowed just six hits, one run, and one walk with eight strikeouts. Last Tuesday against Western Carolina, he pitched 5.0 innings in relief, allowing five hits, one run, and no walks with seven strikeouts.

The Catamounts Western Carolina, led by seventh-year Head Coach Todd Raleigh, enters Tuesday’s game with a 19-13 overall record and 7-5 mark in the Southern Conference after falling twice in three games at Georgia Southern over the weekend. Raleigh, who was a player at Western Carolina under Tiger Head Coach Jack Leggett, has led his team to a 11-1 home record as well.

Trey McDaniel, a transfer from South Carolina, leads the club with a .379 batting average along with nine home runs and 34 RBIs. Blake Murphy is hitting .367 with 12 doubles, seven homers, and 43 RBIs, while Steven Strausbaugh is hitting .368 with 14 homers and 41 RBIs as well. The Catamount pitching staff has a 6.10 ERA and .295 opponents’ batting average. Former Clemson pitcher Brock Thornburg, who never made an appearance on the mound in a Tiger uniform, has two saves and a .218 opponents’ batting average. Greg Holland, who earned a save at Clemson last Tuesday, has a team-best three saves along with a 1.03 ERA and 32 strikeouts in 26.1 innings pitched.

Former Tiger infielder Bradley LeCroy (1997-00), who was a volunteer assistant coach at Clemson from 2003-05, is an assistant coach on this year’s Western Carolina squad and serves as the first-base coach.

The Tigers Clemson enters Tuesday’s game with a 24-8 overall record and 9-3 ACC mark after sweeping Maryland in three games at Doug Kingsmore Stadium over the weekend. The Tigers sport a 5-5 road record, but have won each of the last four road contests. Clemson is also 11-0 when not committing an error and 23-1 when totaling at least as many hits as the opponent.

The pitching staff has a 2.82 ERA and .240 opponents’ batting average. Both lefty Daniel Moskos and righty Steve Richard have four saves. Clemson is fielding at a .967 clip as well. Two active Tigers hail from the state of North Carolina and will make the trip to Cullowhee. Those two players are freshman lefthander Alex Martin (Charlotte) and freshman outfielder D.J. Mitchell (Rural Hall).

Polls Clemson moved up a spot to #5 in the Baseball America poll on Monday after a 4-1 week. The Tigers also climbed to #7 in the Collegiate Baseball and #6 in the Sports Weekly poll.

Clemson Streaking in ACC After starting the ACC schedule suffering a three-game sweep at Virginia, Clemson has reeled off nine conference wins in a row to up its season ACC mark to 9-3, second-best overall in the league behind only Florida State (12-3). The three series sweeps came against #12 N.C. State, #11 Miami (FL), and Maryland. The nine-game ACC winning streak is Clemson’s longest since it won 11 ACC games in a row over the 2003 and 2004 seasons. In 2003, Clemson won its last five ACC games. Then to start 2004, the Tigers won their first six ACC games. The current nine-game winning streak is the longest during a single season since 1995, when Clemson won its first 11 ACC games.

Cribb Control Senior righthander Josh Cribb (Lake View, SC) exhibited excellent control as both a starter and reliever in his time at Clemson. In his first start of 2006, he continued the solid control against James Madison on February 19 in Clemson’s 6-1 victory. He went 5.0 innings, allowing just one walk with seven strikeouts. Then against #25 Kansas on March 10, he was masterful. He pitched 7.0 scoreless innings, allowing only one hit to earn the win in Clemson’s 7-2 victory. He did not allow a baserunner past first base and retired 14 straight batters at one point against a team that entered the game on an eight-game winning streak.

Through seven starts and one relief appearance this season, he is 6-0 with a 1.98 ERA along with allowing just 28 hits and 11 walks with 40 strikeouts. He earned ACC Pitcher-of-the-Week honors after hurling a complete-game six-hitter in Clemson’s 3-1 win over Maryland on April 7. He allowed one run, six hits, and no walks with nine strikeouts in his fourth career complete game. It was also Cribb’s third ACC weekly honor, as he won the award twice in 2005.

Tigers Sweep Maryland Clemson swept Maryland by a combined score of 21-10 at Doug Kingsmore Stadium from April 7-9. The Tigers won by scores of 3-1, 3-2 (11 innings), and 15-7, as they out-hit the Terrapins .327 to .243. Andy D’Alessio, and Taylor Harbin all added five hits apiece. Clemson’s pitching staff had a 1.55 ERA and 26 strikeouts against nine walks. The three starting pitchers combined to allow just two earned runs in 21.2 innings pitched (0.83 ERA). The Tigers committed just two errors as well. In game one, Travis Storrer. In the eighth inning, back-to-back doubles by Adrian Casanova and Herman Demmink plated a run, then Harbin’s safety squeeze that he beat out for a hit scored Demmink. Casanova had a game-high two hits, while neither team committed an error. Chalk set a Tiger record with his 26th career sacrifice bunt as well.

In game two, Storrer hit a sacrifice fly in the 11th inning to give Clemson a 3-2 win over the Terrapins on April 8. The Tigers scored single runs in the first and third innings on run-scoring singles by D’Alessio and Harbin, respectively. Clemson maintained a 2-1 lead until the ninth inning when Joe Palumbo plated Nick Jowers for the tying run on a single through the right side. After getting out of a bases-loaded jam in the top of the 11th inning, Tyler Colvin led off the bottom of the 11th with a double, went to third on D’Alessio’s sacrifice bunt, and scored on Storrer’s fly ball to left field. Daniel Moskos struck out the only batter he faced and earned the win. Jason Berken allowed just four hits and one unearned run with six strikeouts in 6.2 innings pitched as well. Five different Tigers had two hits apiece, as Clemson totaled 12 hits in all. Maryland, who had four sacrifice bunts, had 10 hits, but stranded 13 runners on base.

In game three, D’Alessio hit a grand slam and drove in five runs to lead the Tigers to a 15-7 victory over Maryland on April 9. Clemson, who had 15 hits, scored four runs in the third, five in the fifth, and five in the sixth en route to the sweep of the Terrapins. Chalk went 3-for-4 with three runs scored, Widmann had two hits and three RBIs, and Harbin had two hits, including a two-run homer. The Tigers also stole five bases on the afternoon. Stephen Faris allowed one earned run in 6.0 innings to earn the win.