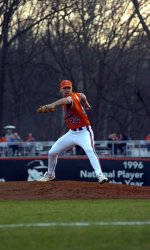 Fourth-ranked South Carolina hit four solo home runs in the first three innings and held on to defeat #13 Clemson 4-2 Wednesday in front of 5,821 fans at Sarge Frye Field. The Gamecocks improved to 30-8 overall, while the Tigers fell to 25-11.

Gamecock starter Mike Cisco (3-2) limited the Tigers to just four hits and one run while striking out five in 6.0 innings pitched to earn the win. Will Atwood picked up his first save as well.

The Gamecocks wasted little time getting on the scoreboard in the first inning, as Jones hit an opposite-field solo homer to right field. It was his 11th long ball of the year.

The Tigers scratched with a run in the fourth inning, as Marquez Smith tripled to center and scored on a groundout to second by D’Alessio.

After four scoreless innings, D’Alessio blasted a two-out solo homer to center in the ninth inning. It was his fourth home run of the season. It was also the 46th of his career, including his first against South Carolina.

After 15 straight days without a home game, Clemson will return to play host to Virginia in a three-game series this weekend beginning Friday at 7:15 PM.