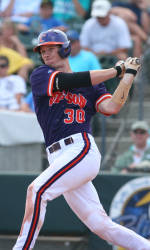 Clemson rallied in the eighth inning, but #3 Florida State held on to complete a three-game sweep of the Tigers with a 4-2 victory in front of 4,156 fans at Doug Kingsmore Stadium on Monday. The Seminoles banged out 12 hits in improving their season record to 40-7 and their ACC mark to 22-5. Clemson fell to 24-23-1, including a 10-16-1 ACC record. Eleven of the Tigers’ 16 conference losses have been by two runs or less.

Buster Posey had three hits, while Florida State cleanup hitter Jack Rye turned in a 2-for-5 outing with a two-run homer. Dennis Guinn added a solo long ball in the seventh inning for the Seminoles, who improved to 16-3 in games decided by two runs or less in 2008.

Doug Hogan went 3-for-4 with two RBIs, while Jeff Schaus extended his hitting streak to 11 games with a single for the Tigers, who totaled nine hits in the contest. Clemson had 13 baserunners, but it scored only two runs thanks in part to hitting into three double plays.

Seminole pitchers Geoff Parker and Jimmy Marshall scattered nine Tiger hits while allowing two runs. Parker (5-1) earned the win after tossing 7.2 innings, allowing eight hits and two runs while walking three and striking out four. Marshall, who pitched the final 1.1 innings, picked up his second save of the season.

The Seminoles got on the scoreboard with a run in the second inning. Tommy Oravetz led off the frame with a single through the left side and moved to third on a double down the right-field line by Mike McGee. With one out, Tyler Holt plated a run with a sacrifice fly to right.

The Tigers threatened with the bases loaded in the bottom of the second inning, but a groundout by Mike Freeman ended the inning.

Florida State added two runs in the third inning thanks to Rye’s two-run homer to right. It was his fourth home run of the year.

With two outs in the seventh inning, Guinn belted a solo homer over the left-field fence. His 14th long ball of the season put the Seminoles ahead 4-0.

The Tigers cut the Seminoles’ lead to 4-2 in the eighth inning. Schaus drew a leadoff walk. Two batters later, Ben Paulsen singled to left. Both runners moved up a base on a groundout by Wilson Boyd. With two outs, Hogan drove in both runners with a single through the left side. Hogan advanced to second base on a passed ball, but he was stranded there when Chris Epps lined out to Holt in center.

Stan Widmann led off the ninth inning with an infield single. John Hinson followed with a slow-roller over the mound. The ball hit the back of the mound and bounded towards the second-base bag, where shortstop Tony Delmonico was positioned. Delmonico fielded the ball and stepped on the second-base bag simultaneously, just ahead of a sliding Widmann. He then threw to first to retire John Hinson in another close play. Marshall then struck out Freeman to end the game.

Clemson is slated to return to action on Wednesday night when it faces Furman at Fluor Field in Greenville, SC. First pitch for the neutral-site contest is scheduled for 7:15 PM.