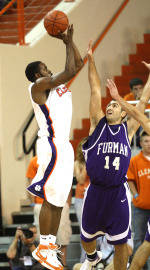 Quick Facts  Clemson is ranked in the national polls this week, the earliest the Tiger program has been ranked in a season since 1998-99. The Tigers are 22nd in the ESPN/USA Today coaches’ poll and 24th in the Associated Press poll. Clemson is ranked in both football and men’s basketball in the same week for the first time since November 18, 1996.

 Clemson was 18-1 last year against non-conference teams, and is 3-0 so far this season.

 Clemson has a 21-1 record in the month of November under Oliver Purnell and has won 16 games in a row in the month. Clemson is 84-15 all-time in November.

 Clemson and Presbyterian will be meeting for the 70th time in the series history Wednesday. The Tigers hold a 50-17-2 all-time advantage over the Blue Hose.

 The Tigers outrebounded Old Dominion by 10 on Sunday, despite the Monarchs having two starting frontcourt players 6-10 or taller. James Mays and Trevor Booker both posted double-doubles for Clemson.

 Clemson continues to force turnovers at a rapid rate. The Tigers forced Furman into 37 turnovers in the season opener, Mississippi State had 19, then Old Dominion committed 23 turnovers. Clemson ranks second in the ACC in turnover margin (+10.67).

 Mays has posted back-to-back double-doubles for the first time in his career. He had 14 points and 11 rebounds at Mississippi State, then tallied 17 points and 10 boards in the home win over Old Dominion on Sunday.

 K.C. Rivers ranks among the ACC leaders in three-point shooting. The junior marksman from Charlotte, NC is hitting 57.1 percent of his three-point attempts (8-14) and is second on the team in scoring at 14.7 points per game.

 Rivers ranks second on the team in rebounding from his small forward position. He is averaging 7.3 per game so far this season and boasts a career mark of 4.7 per game.

 Clemson’s freshman class has certainly contributed to the success of this year’s team. Demontez Stitt is averaging 9.3 points per game, while Terrence Oglesby is at 9.0 per game. Jerai Grant is averaging 2.3 points per game in a reserve role. The three freshmen have combined to make 22 out of 26 free throw attempts, which equates to an 84.6 percent figure.