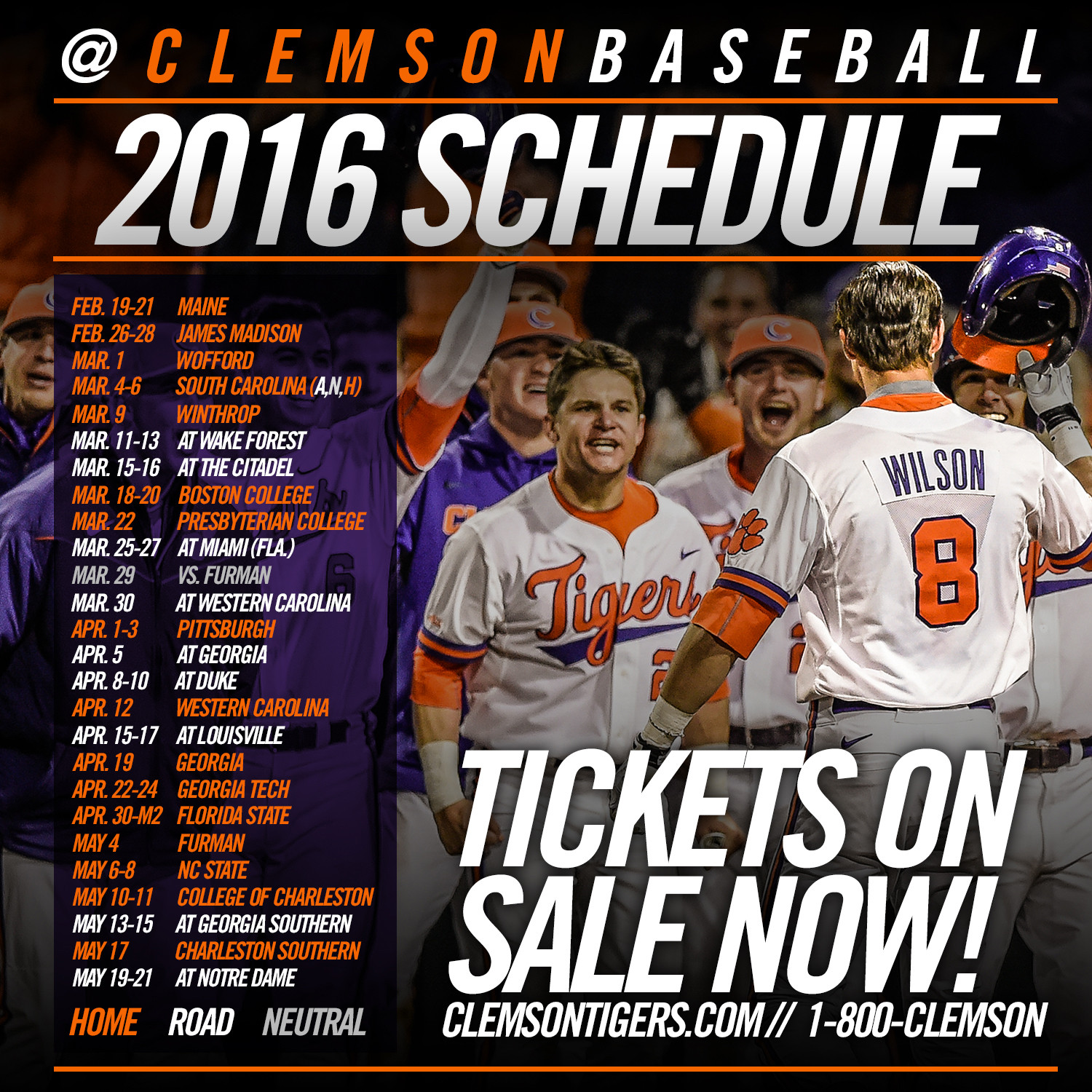 Clemson opens the season with a seven-game homestand at Doug Kingsmore Stadium. After hosting Maine, James Madison comes to town for a three-game series from February 26-28, followed by a midweek game against Wofford to close the homestand.

The Tigers then face South Carolina three times at three different sites. The series begins a stretch of 29 games where 19 are away from home. Clemson travels to Columbia on March 4 to open the series in the 310th all-time meeting, then the two square off at Fluor Field the following day. On March 6, the series concludes at Doug Kingsmore Stadium. The Saturday contest at Fluor Field marks the fifth time in six years the two rivals match up at Fluor Field for their neutral-site game.

After a midweek home game against Winthrop, the Tigers begin ACC play at Wake Forest from March 11-13. Clemson stays on the road to play at The Citadel for two midweek games. The two last met in 2004 at Doug Kingsmore Stadium, while the last meeting in Charleston came in 1990.

Clemson returns home for its ACC home opener against Boston College from March 18-20 and hosts Presbyterian College before returning to the road for five straight games away from the friendly confines. The Tigers face the Hurricanes in Coral Gables, Fla., then travel to Furman and Western Carolina for midweek games.

Pittsburgh visits Doug Kingsmore Stadium for the first time from April 1-3, then Clemson plays one game at Georgia and three games at Duke.

Western Carolina makes the return trip to Clemson, then the Tigers hit the road for the fifth time in seven weekends to play at Louisville for the first time in school history.

Starting with the April 19 game against Georgia at home, the Tigers begin a 13-game homestand through May 11. Clemson hosts back-to-back ACC series against Georgia Tech (April 22-24) and Florida State (April 30 – May 2), with final exams between the two series.

Clemson closes the homestand with a series against NC State sandwiched between non-conference games against Furman (1) and College of Charleston (2), the school Tiger head coach Monte Lee served at from 2009-15.

The Tigers play six of their final seven regular-season games on the road, including their annual May non-conference weekend series, this year at Georgia Southern, before playing their regular-season home finale against Charleston Southern. Clemson plays its final three games of the regular season at Notre Dame from May 19-21.

Ten teams will participate in the ACC Tournament at Durham (N.C.) Bulls Athletic Park from May 24-29. The regular-season winner of each division gets one of the top-two seeds, while the eight remaining teams with the best ACC regular-season winning percentage also make the 10-team field.

On May 24, seeds 7-10 match up in play-in games, then the two winners of those games join the top-six seeds for an eight-team, round-robin tournament, the same format that has been used for the ACC Tournament since 2007.