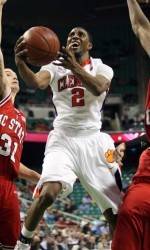 CLEMSON, SC – The 2010-11 men’s basketball schedule was announced Thursday by Head Coach Brad Brownell and the Atlantic Coast Conference. The Tigers’ 30-game slate is highlighted by a non-conference trip to the Virgin Islands for the Paradise Jam, as well as an ACC regular season schedule in which a minimum 15 of the 16 games will be televised.

“We’re looking forward to an exciting season,” Brownell said. “I’ve repeatedly said that I think the ACC is the best basketball league in the country. This year the league looks to be as competitive as ever. It’s going to be a lot of fun to go into some of the great venues in our league and play.”

The season will get underway on Friday, Nov. 12 at home against Western Carolina at 8:00 PM. The Tigers will quickly turn around to face 2010 NCAA Tournament participant and reigning Southern Conference champion Wofford on Nov. 15 at 7:00 PM.

Other non-conference games of note will be the Nov. 30 ACC/Big Ten Challenge meeting against Michigan at Littlejohn Coliseum, a Dec. 5 matchup at South Carolina, and a Dec. 22 return game at the College of Charleston. The game against College of Charleston will be televised regionally by Fox Sports Net South, as will the Dec. 19 home affair versus UNC Greensboro.

The Paradise Jam will be held Nov. 19-22 in St. Thomas, Virgin Islands. Clemson will face Long Beach State in a first-round game on Friday, Nov. 19 at 3:30 PM (Eastern). Ironically, this will be the second straight season the two teams have met in an exempt tournament. Last year, the Tigers pulled out an 87-79 win over the 49ers in the 76 Classic in Anaheim, CA. The winner of the game will face the winner of Old Dominion vs. St. Peter’s. The other side of the bracket features Alabama, Iowa, Seton Hall and Xavier.

“The Paradise Jam will be a really good tournament,” Brownell said. “We are playing several quality teams from our region in our non-conference schedule. Our team will be challenged early on as they adjust to a new system, and a new style of play. We’ll play several teams that will have a good chance to win their respective league.”

The Tigers’ conference schedule will tip off in December this season. Clemson will take on Florida State in Tallahassee on Sunday, Dec. 12 at 6:15 PM. The game will be broadcast nationally by Fox Sports Net as part of the “Sunday Night Hoops” package.

Clemson will have seven appearances on the ESPN family of networks this season, including six conference games and the ACC/Big Ten Challenge tilt against Michigan. Three of the games will be televised by ESPNU, including home games against Miami (Jan. 8) and Boston College (Feb. 8).

“One of the great things about our league is the exposure,” Brownell said. “It’s great to have a bunch of games on ESPN, ESPN2 and ESPNU. I’m excited that our fans will be able to watch us play just about every game this ACC season.”

The Tigers will play back-to-back road games on three different occasions in the months of January and February, starting with trips to Chapel Hill, NC (Jan. 18) and College Park, MD (Jan. 22) to take on North Carolina and Maryland, respectively. The Tigers’ ACC road slate concludes with a Mar. 5, nationally televised contest versus defending national champion Duke.

For the first time in three seasons, Clemson will end the ACC campaign with a home game. The Tigers will play host to a strong Virginia Tech squad on Saturday, Mar. 5 at Littlejohn Coliseum in a nationally televised game. The conference tournament, which once again will be held at Greensboro Coliseum, will take place Mar. 10-13, 2011.