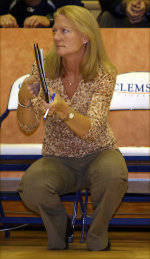 CLEMSON, SC – Head Volleyball Coach Jolene Jordan Hoover has announced her team’s schedule for the upcoming 2009 season. The Tigers will kick off the year with the 19th Annual Big Orange Bash over the Aug. 28-29 weekend and will play in four tournaments during the first month of the season.

Clemson will play host to Winthrop, the College of Charleston and South Carolina at Jervey Gym in the Big Orange Bash for a battle between state schools. The Tigers will open against South Carolina to highlight Friday night’s matches and will then face the Eagles and Cougars on Saturday.

The team will then travel to Chicago for a trio of matches at the DePaul Tournament. The trip will be a homecoming for rising senior setter Kelsey Murphy. A three-year starter from New Lenox, IL, Murphy is a two-time AVCA Honorable Mention All-American and was named to the All-ACC First Team in 2007 and 2008. She will lead Clemson against the host-Blue Demons, Loyola and Western Illinois on Sept. 4-5. The Tigers will be playing their first match in history against the Westerwinds of Western Illinois and have won all four matches against DePaul and Loyola combined.

Clemson will participate in Georgia Tech’s tournament over the Sept. 11-12 weekend with the match against the Yellow Jackets also counting as the ACC opener. Ole Miss and Southeast Missouri will round out the four-team field.

The Tigers return to Jervey Gym for the Clemson Classic on Sept. 18. They will welcome Furman, Presbyterian and Michigan State to town for the two-day event. Although just 70 miles separates the Tigers and Blue Hose, the two schools have not met since the 1986 season.

The full conference schedule will be fully underway on Sept. 25 as Clemson will play host to 2008 ACC Champion North Carolina. The Tigers will then take on NC State at Jervey Gym the following night. Clemson will kick off the month of October with matches at Miami and Florida State before returning home to face Boston College and Maryland on Oct. 9-10, respectively.

The team will hit the road again for matches at Virginia and Virginia Tech over the Oct. 16-17 weekend and will then play host to Charlotte in a mid-week non-conference match on Tuesday, Oct. 20. It will be the first time the Tigers will step out of ACC play this late in the year since the format changed to the home-and-home arrangement prior to the 2005 season.

Clemson will face Duke and Wake Forest just one time in 2009 with the matches being held at Jervey Gym on Oct. 23 and Oct. 24. The Tigers will then begin the second half of the league schedule and trade venues with their opponents. Clemson will play its final two weekends at home and will wrap up the regular season against Georgia Tech on Friday, Nov. 21.

The Tigers are coming off their second straight NCAA Tournament appearance. Clemson advanced to the second round of the event in both 2007 and 2008 to mark the first time in school history that the team had won a match in the national tournament in back-to-back seasons. The Tigers finished with a 23-10 overall record and returns five starters from that squad, including Murphy and fellow seniors and all-conference players Lia Proctor and Didem Ege.