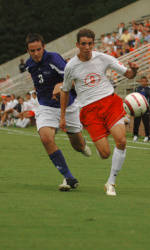 Virginia Tech, which made its first-ever trip to the NCAA College Cup this season, led all schools with seven honorees on the academic team. After recording a record-high eight selections last year, the Blue Devils added six to the 2007 academic squad, while Clemson, Maryland and Wake Forest notched four student-athletes each on the squad.

Wake Forest, led by head coach Jay Vidovich, claimed its first-ever men’s soccer national championship, finishing the season ranked No. 1 in the nation with a record of 22-2-2, the best mark in WFU soccer history.