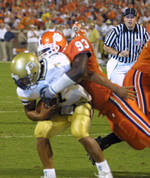 “This is again a very challenging schedule,” said Head Coach Tommy Bowden. “We will face seven teams that won at least seven games last year, including two of the top teams in the ACC, within our first three games, both on the road. Plus, we have to go to Virginia Tech, who won more games than any other ACC team last year.

Clemson’s next two games are on the road against ACC upper echelon teams Boston College (September 9) and Florida State (September 16). The Eagles are the only school in the nation to have won a bowl game each of the last six seasons and finished with a 9-3 record in 2005, while Florida State is the defending ACC Champion. It will be Clemson’s first trip to Boston since 1983 when Doug Flutie handed the Tigers their only loss in a 9-1-1 season. This will be the earliest date on the calendar that Clemson has played in Tallahassee since 1993. The Tigers have not won at Florida State since 1989.

Clemson will return home to face North Carolina on September 23. It will be North Carolina’s only game at Clemson between 2004 and 2011. The Tigers won a thrilling 36-28 game at Death Valley in 2003 the last time the two teams met.

The Tigers will travel to Wake Forest for the third time in the last four years on October 7, then play in the state of Pennsylvania for the first time since 1947 (at Duquesne) when the Tigers play at Lincoln Financial Field against Temple on October 14. The Temple game could be played on September 30.

Four of the last five games will be at home. Clemson will attempt to end its two-game losing streak against Georgia Tech when the Yellow Jackets come to Death Valley on October 21. The two teams have played games decided by five points or less nine of the last 10 years.

Clemson will then play at Virginia Tech in a Thursday night matchup on ESPN on October 26. The contest will be just five days after the Georgia Tech game and will be just the fourth time since 1933 that Clemson has had just four days in between games. It will be the first meeting between Clemson and Virginia Tech since the Gator Bowl at the conclusion of the 2000 season. They also met in the regular season in 1998 at Clemson and at Virginia Tech in 1999 in Tommy Bowden first season as Tiger head coach.

Clemson concludes the season with three consecutive home games for the first time since 1998. Maryland travels to Death Valley on November 4. The Tigers have won consecutive games by four points or less against the Terps, while NC State will close Clemson’s ACC schedule on Saturday November 11. It will be just the second time in the last five years that the two teams have played on a Saturday.

Clemson and Florida State are the only two ACC teams who will conclude their ACC schedule on November 11. There will be nine more conference games to be played November 18-25. Atlantic Division rival Boston College will have two more conference games after Clemson’s league season is concluded. The ACC Championship game will be held December 2 in Jacksonville, FL.

The Tigers will have two weeks to prepare for South Carolina, as the annual state rivalry game will be played the Saturday after Thanksgiving for the first time since 1984. The November 25 date is the latest for the South Carolina game since the two teams played on the same date in 1978.

Clemson will not play ACC teams Miami (FL), Duke or Virginia during the regular season. It will be the first time Clemson has not played Duke since 1964.

Bowden also announced that Spring practice would start Saturday March 4 and conclude with the annual Spring Game at Death Valley on April 8.

Home Games in BoldOpponents on Sept. 30 and Oct. 14 to be determinedTimes and Game Designations TBANote: Spring Game at Death Valley, April 8, 1:00 PM