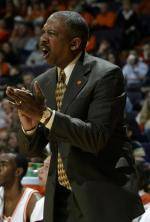 Notes on the Clemson Schedule

Clemson has four first-time opponents in Hampton, Ohio State,Norfolk State and East Carolina. The season opener is November 19against Hampton. That will be the Friday evening prior to theClemson vs. South Carolina football game, which will be played atClemson this year. Clemson will meet Miami (FL), Virginia Tech andBoston College during the regular season, the three schools thatwill be joining the ACC over the next two years. The Miami (FL) andVirginia Tech games count in the conference standings this year andBoston College joins the league in 2005-06. Clemson has never lostto Miami (FL) and Boston College, a combined 8-0. Clemson will playat Boston College the day after Thanksgiving (November 26) and thatwill be Clemson’s first ever basketball game in the state ofMassachusetts. Clemson has a perfect 8-0 record against teams fromMassachusetts in its history, but all eight of the games haveeither been at Clemson or at a neutral site. Clemson will betraveling to the Rainbow Classic for three games between December21-23. This will be Clemson’s fourth trip to the Rainbow Classic,its first since the 1993-94 season. Clemson has a 7-2 record in theRainbow Classic in its three previous appearances, including achampionship in 1980-81 when Clemson won three games by four pointsor less. Among the victories was a 58-57 win over Indiana, a BobKnight coached team that won the National Championship that year.That is the only time Clemson has defeated the eventual nationalchampion over the regular season. Clemson has an 11-3 recordoverall in games played in Hawaii over the years. In addition toClemson’s first-round game against UAB in the Rainbow Classic, theother teams in the field are Indiana State, Long Beach State, OralRoberts, Georgetown, Southern Cal, and Hawaii. Clemson will playhost to Ohio State in the ACC vs. Big Ten Challenge on December 4,a game that will be televised on ESPN2. This will be Clemson’sfirst ever meeting with the Buckeyes. Clemson is 7-14 all-time vs.Big Ten teams, but the Tigers are 3-2 in the ACC vs. Big TenChallenge. Clemson has 16 games that are considered home games,including the Georgia game in the BiLo Center in Greenville.Clemson will have at least one game on every day of the week withthe exception of Monday. Nine games are on Saturday, seven onTuesday, seven on Wednesday, three on Friday, two on Sunday and oneon Thursday. There are 12 different tip times for the 29-games onthe regular season schedule. The most common start time is 7:00 PMwhich occurs eight times. Clemson has just one 9:00 PM game, theNorth Carolina game on January 19. Seven of the 29 games start at4:00 PM or earlier and would be considered day games. The Clemsonat North Carolina game on Feb. 19 will have a 1:00 PM start andwill be televised by ABC. For the first time, ACC teams won’t playeach other on a home-and-home basis during the regular season.Clemson will play Virginia, NC State, Duke and Wake Forest justonce this year. NC State and Wake Forest will come to Clemson andClemson will play at Duke and Virginia. This will be the first timeClemson has not played in Raleigh since 1972-73 and the first timeit has not played Wake Forest in Greensboro or Winston-Salem sincethe 1945-46 season. Clemson has just two of its first seven ACCgames at home, but will have a stretch of four consecutive ACC homegames between January 29-Feb. 12. This will be the first timeClemson has had four straight conference home games since January19-30, 1985. In addition to the four straight ACC home gamesbetween January 29-Feb. 12, Clemson will play host to Georgia inGreenville on Feb. 16. That means Clemson won’t have an overnightroad trip between January 27 to Feb. 17, a stretch of 22consecutive days. Clemson will have at least 18 games (includingfirst round of the ACC Tournament) on live television. Fournon-conference games and 13 conference games will be televised. Alleight ACC home games will be on some type of television, but leaguegames at Florida State, Virginia and Miami (FL) will not be aired.

Coach Oliver Purnell on the 2004-05 Schedule “Our pre-conference season is very challenging when you look at the likes of South Carolina on the road, Boston College on the road, Georgia at home in the Bi-Lo Center (Greenville, SC) and Ohio State at home in the ACC-Big Ten Challenge. Those are obviously teams with a national profile who have excellent basketball programs. All of those teams will challenge us and help us prepare for conference play.

“We also are playing a number of teams that will be good competition in Hampton, The Citadel, UNC Asheville and Charleston Southern. We are also competing in one of the most historically prestigious holiday tournaments in the Rainbow Classic in December. The is strong once again and we will open with UAB.

“The ACC once again will be the premier league in the country. The addition of Virginia Tech and Miami (FL) will certainly create interest as well as with the new format. Overall, this year’s schedule looks to be as tough as last year. Our young ball club is certainly looking forward to the challenge.

“Our ACC schedule seems to be pretty consistent in terms of days off between contests. A Wednesday-Saturday format (predominately) will help us settle into a routine, and it will also be beneficial from an academic standpoint as the players will have a more set schedule and a routine to follow.”