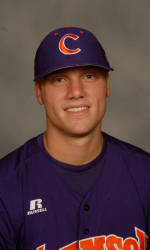 The Tigers jumped out to a 3-0 lead in the second inning, then they scored five runs in the fifth inning to break the game open. In all, the Tigers tallied 12 hits and 12 walks while striking out just three times.

Tiger starter Trey Delk (3-1) earned the win, as he allowed five hits, one run, and one walk with two strikeouts in 5.0 innings pitched. It was a memorable day for the Elgin, SC native, as earlier in the day he received his degree in psychology. Scott Weismann, Craig Gullickson, and Josh Thrailkill combined to allow just one run on four hits in the final 4.0 innings pitched.

The Tigers took the game’s first lead in the second inning. Wilson Boyd drew a one-out walk and went to second on Brad Miller’s bloop single to right field. John Nester then lined a double off the centerfield fence to score Boyd. After Chris Epps walked after being down in the count 0-2 to score Miller. Mike Freeman then lofted a sacrifice fly to right-center to score Nester, giving Clemson a 3-0 lead.

The Seahawks got on the scoreboard in the top of the fourth inning. Robbie Monday hit a one-out single through the right side but was erased on David Shambley’s fielder’s choice. Matt Holt then belted a two-out double to left-center to score Shambley.

The Tigers added two runs to their lead in the bottom of the fourth inning after a 38-minute lightning delay. Stolz started the rally with a two-out single to center and stole second. Epps followed with a double to left field to score Stolz, then Freeman laced a double to center to score Epps.

In the fifth inning, Clemson scored five more runs to up its lead to 10-1. Walks by Ben Paulsen, Kyle Parker, and Boyd loaded the bases with no outs. Miller hit a sacrifice fly to left-center to score Paulsen, then Nester bounced a single up the middle to score Parker. Stolz followed with a single through the right side on an 0-2 pitch to plate Boyd. Epps then lined a double down the left-field line to score Nester. After Freeman walked to load the bases, Jeff Schaus hit a sacrifice fly to right-center to score Stolz.

Monday hit a solo homer to right-center in the sixth inning, his 10th long ball of the season.

In the eighth inning, walks by Schaus, Paulsen, and Addison Johnson loaded the bases, then Miller walked to score Schaus. Two batters later, Matt Sanders grounded a two-out single through the left side to score Paulsen and Johnson.

Epps led the Tigers at the plate by going 3-for-3 with two doubles, three RBIs, and a walk. Nester was 2-for-3 with a double, two runs, and two RBIs, while Sanders added two hits and two RBIs in two at-bats off the bench.

Ben Thielsen, Cody Stanley, and Monday had two hits apiece for UNC Wilmington, who totaled nine hits but left 10 runners on base.

Clemson and UNC Wilmington will play game-two of the three-game series on Saturday at 6:30 PM.